Friday was a day to remember.  Dad and I went north to do some sightseeing and visit his cousin.  We don’t always get a lot of time together so it was enjoyable to set aside a little.  As parents age and they fade a little, it’s extra important to enjoy the good times.  Yesterday was such a day.

Our first stop was about sixty miles east and slightly north of Cedar Rapids in the small town of Maquoketa.

The readers might remember a post last spring about the drive-in theater visited which is just a few miles to the south of Maquoketa (Muh-ko-kuh-tuh).  Much of Mom’s life was spent in this town in Jackson County, Iowa.

The small town bakery has changed hands numerous times but is still very good.  I bought Dad a glazed donut which he said was the best he has had in years. 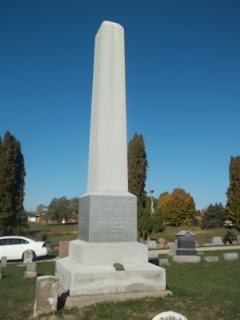 From there we headed further northeast toward the Mississippi River, passing through the tiny town of Andrew.  I was hoping to journey through here again this year and find the grave of Iowa’s first Governor, Ansell Briggs.  The obelisk you see to the left is the monument.   It is marked as follows:

We continued on our trek to the north and east to the town of Bellevue, a small city along the Mississippi River.  Bellevue is a perfect example of a clean, thriving small town that is just perfect as a picnic and camping destination.  Our intention was to do a little trout fishing at nearby Big Mill park – a stocked stream just west of town. 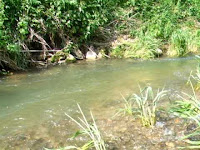 I messed up.  Instead of Big Mill, somehow I got turned around and ended up at Little Mill, another nearby stream.  There was only one vehicle there.  The young man in the truck parked next to us was very friendly and advised that the stocking truck had just gone by about twenty minutes earlier and dumped a LOT of trout into the various holes.  That meant I had the whole stream to myself…  What luck!

The terrain was difficult.  To get to the best holes, one had to walk on foot along a rugged trail, or climb over an electric fence and trespass on a farmer’s land.  I chose to cross the fence and hiked to the spots about 3/4 mile away from the car.  Somehow I snagged the crotch of the sweatpants on barbed wire.  One can imagine the careful maneuvering required for extrication…  One fall could change the voice by two or three octaves!

Poor Dad had to stay in the vehicle since the ground was simply too tricky for him to attempt to navigate.  As it was, I fell down an embankment, struck the mid and upper back/ neck area on some limestone and got the wind knocked out.  It happened so fast I had to laugh because there wasn’t even time to cuss a little!  Then it occurred that had I hit my head and fell in the deep hole… well, we don’t worry about near misses.   🙂

The trout fishing was fast and furious.  I found an isolated spot and lured a couple of fat rainbows out from under rocks.  They are “stuffers’ – the kind I slit from chin to bunghole, clean out, and fill with crab stuffing (canned crab, Stove Top stuffing, diced onions, butter, hot sauce and then bake).  The other three fish (you can only take 5 a day) were medium sized.  Dad was delighted with the catch and we had a nice talk while cleaning the fish in the stream.  He mentioned that while I was fishing he had walked down just to listen to the babbling of the water passing over the rocks.

After the fishing stop it was on to Dubuque.  Along the way we stopped at a small abbey – the Our Lady of the Mississippi Abbey.  The nuns there make the most amazing caramels in regular and chocolate flavors as well as other tasty confections.  If a person is looking for a special gift, I’m sure the recipient would be grateful.  Here’s their website:   Monastery Candy   (Dad and I have toured the facility where the nuns create the caramels – it’s amazing!) 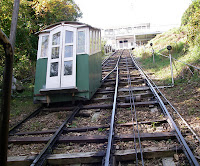 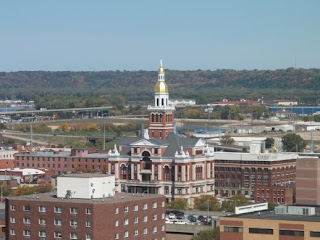 With a belly full of caramels (and I’m sure blood sugar to match), we headed into Dubuque.  I rode the Fenelon Place Elevator Company’s little tram from 4th Street to the top of the bluff.  Dad didn’t feel up to it.  It is likely that I wrote about this little cable car in a previous post.  It’s a favorite destination and every bit as fun to ride as I remember as a kid.  Supposedly it is the world’s steepest and shortest elevated railway.  If you are in the area, it’s a must visit.  Just check out the incredible view of Dubuque (and the courthouse)  That is the Mississippi in the background and the Wisconsin landscape at the horizon. 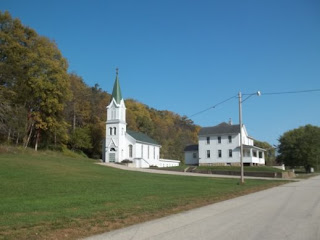 Our next stop was at Elkport, Iowa which is further north and a bit west.  Other than a gas station and this little church, there is virtually little left of Elkport.  It was destroyed by a flood in 2008.  Across the sleeping Turkey River is the town of Garbor, another town that had part of its buildings ravaged by high waters.

It wasn’t the first time.  Dad tells of a flood many years ago that tore up the two towns.  Some of the residents relocated further up the hill.  When the river flooded again they were so happy (“tickled”) not to get washed out they called the little settlement “Tickletown”.  You will never find Tickletown on a map and the imaginary “boundaries” only exist in the memories of an aging population.

As we passed through the area, I commented to Dad that these old roads were out in the boonies.  I said something like “As far out here as we are, it wouldn’t surprise me if we were by the Hansel Cemetery” (a private family burial site).  Sure enough, a half mile later I saw the sign.  We visited the little cemetery and paused to gather a number of black walnuts that had fallen in the road and grassy areas.  They will provide extra flavor for plenty of pancakes, cookies, etc. for the winter months. 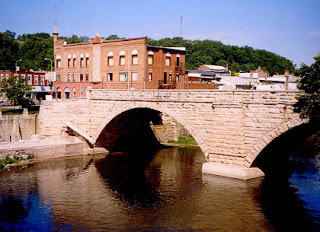 Dad and I stopped to visit Florine, his cousin, in Elkader, Iowa.  Elkader is the seat for Clayton County.  It is a beautiful town just upstream on the Turkey River.  This city has a wonderful theater and a thriving downtown area.  Just northwest is the Big Springs trout hatchery (where Little Mill’s trout came from).  North about ten miles is St. Olaf and those wonderful, large tenderloin sandwiches.  At some point there will more in depth posts about this region. 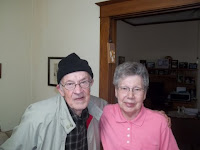 Here is a picture of Dad and his cousin, Florine.  Florine is a Hansel and a wonderful story teller.  She has lived in this area for over eighty years and has many historical accounts to relate.  One of my favorites is a story of how one of the relatives got a little tipsy, parked his Model A Ford car on a steep gravel driveway, hopped out to open a gate, and then the car rolled back down the hill and crashed.  Florine, as well as her deceased mother, Cecil, loved kids.  I remember them both from the very earliest recollections.  They are two of the favorite relatives.

That is Dad on the left side of the picture.  He has not visited the area for some time because the state restricted how far he can drive.  We all agreed that in a few weeks we are going to get together.  Dad and Florine will go their way for a couple days and I will do like Granddad would have… go trout fishing.  It’s been a while since fishing at the Bloody Run trout stream…  Sounds like fun.  🙂

Just a sidenote… Grandpa used to sell Wallace’s Farmer insurance to a number of clients on farms in northeast Iowa.  Grandma would pack him a lunch and often include a ball of Velveeta cheese and flour wrapped in foil.  Grandpa wasn’t fooling anyone – he spent much of the time fishing at the many trout streams.  He is the reason I love so much to fish… 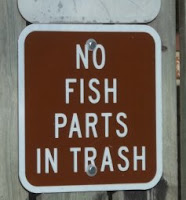 I thought the readers would find the little sign about fish parts somewhat amusing.  Seriously, that’s like saying “No tinkling in the river while fishing.”  I doubt many people pay attention.  This sign is  at a little park in Elkader along the Turkey River.

After hugging Florine and saying our goodbyes, Dad and I set out for Motor Mill park.  Motor Mill is a fascinating place just downstream of Elkader along the east side of the Turkey River.  Motor Mill, a Clayton County park, is the site of an old mill, livery, hotel, and ice house.  All the buildings are made of limestone.  Motor Mill also has fishing and camping opportunities available.  Even Dad, the non-camper, told me to take the van here one day.  One day I will. 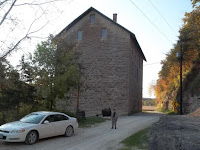 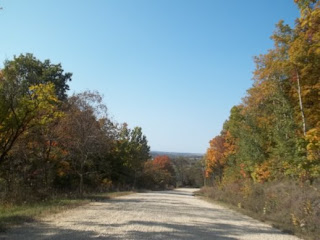 That’s Dad standing by the old mill, behind the Impala.  Above is another picture of the county road that passes through the area.  Clayton County is so remote that many of the county roads are not even paved!

With a lot of memories of a fun day, the sun was starting to set.  We drove back to the Country Junction Restaurant in Dyersville, Iowa.  I wrote about that eatery in a previous post.  There we had hot beef sandwiches and I split a piece of homemade coconut cream pie with Dad. Their carrot cake looked so good and then I remembered the vow not to eat any carrot cake till I lose another 60.5 pounds.  Dad raved continually about the meal and the fun time we had.  This was a trip to remember and meal really clinced it.

It was a fun trip… for both of us. It was also unscripted. The places I wanted to see took a backseat since we decided to just “wing it”. Dad was happy to see some places he had always wanted to visit. We just wandered, explored, and enjoyed.

Dad’s breathing became labored on the way home.  He was a little confused.  I watched as the sun set and thought how the seasons are changing in Dad’s life.  He won’t be with us at some point in the future.  It’s difficult to watch a loved one decline and start to fade from our lives.  I’m just grateful that I can be here to make his remaining days more comfortable.  Maybe we can squeeze in a few more trips while there is still time.  There are plenty of places we can show each other along the way.

Thanks for visiting.  Take care and get out there and enjoy the changing of the seasons.  Don’t wait till tomorrow or the next day – a person may not get a second chance.  One other piece of advice.  If hooked in barbed wire, don’t make any sudden moves.

Make it a good one.