Results of the Weight Loss Challenge

It’s official now… The paid phase of the weight loss challenge is wrapped up.  Between the end of December 2011 and now, 60.5 pounds have been jettisoned.  It was a battle to the very last.  This week has been pure hell – workouts two and three times a day, minimal calories, etc.  That goal of 60 pounds was elusive until just the last few days.  But it’s here now.  Three consecutive scale readings today and two days of similar numbers made the results official.  In a few days I will be seeing my sister to cash in on that $605.00 reward!

That’s a nice chunk of change so it’s been fun to figure out what to do with the proceeds.  Van trekking is a priority since it’s been a source of exciting, healthy, outdoor fun.  Some of the cash will go toward pre-paid gasoline cards for future biking / hiking / fishing trips.  What to do with the rest of the funds is still up in the air.  Linda, a Registered Dietitian (and one of the nicest and most helpful people you will ever meet) at the Hy-Vee grocery store, suggested having the money buy some new clothes!  That sounds like a great idea.  One thing is for certain.  There are more adventures ahead!

The weight loss journey was started to honor my late mother, Doris Harris Sanders.  Here is a picture of her.  I just wish she was here for the news.  We lost her about two years ago.  Mom was also a diabetic, something we talked about just days before her death.

Mom said “Fred (my nickname), you’ve just GOT to get this under control!  You’ll kill yourself if you don’t!”

Mom died before she could see the van dream come to fruition, the weight loss, the happier, healthier person, but I am sure she would be proud.  You helped make it happen, Mom!  I love you and miss you!

My sister played a huge role in all of this.  If it wasn’t for her help, this effort to start losing weight would have joined Weight Watchers, The Target Diet, The Atkins Diet, The South Beach Diet, Xenical, the Grapefruit Diet, Slimfast, Sweating to the Oldies, and countless other failed attempts to get thinner.  Sis’ interest and monetary motivation helped tremendously…Of course, a few memories of sibling rivalry from our teenage years made it even more fun. 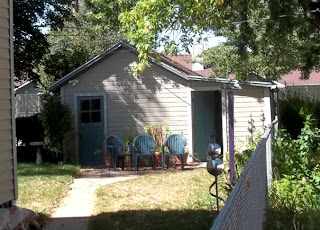 You see, when we were kids there was a basketball hoop located at the top of our garage.  From between both doors of the garage and toward the front stretched a triangular sidewalk.  We used to shoot hoops from there.  Yesterday I went back to the old house and took the liberty of trespassing into Mr. Barton’s yard to snap a quick photo of the setup, minus the old rusty hoop.

My sister is several years older than me and she was pretty good at making basketball free throws.  We would occasionally bet our allowances on who could sink the most shots from various positions along the sidewalk.

A couple of times I won and she refused to pay up.  Then, of course, a fight would ensue.  Mom was usually the referee.  In those cases, nobody won because the arrangement was nullified.  Only as an adult do I see the depth and logic of Mom’s impartial rulings.  Ha ha ha… Well, this time I won the bet, Sis.  Now pay up!   🙂    All in good fun though, of course!
Dad also helped a lot during the last nine months.  As the food intake was cut and pounds shed, it was clear that exercise was needed or the progress would stall.  Dad suggested mall walking.  It has now become a healthy habit.  We were at Lindale Mall last night.  The favorite haunt is a popcorn store.  Just for today, breakfast is going to be Diet Coke and cheddar jalapeno popcorn… Then it’s back to the grindstone.
Even though the challenge between Sis and I has been completed, there is some exciting news coming in the next post.  Simply too much is going well to stop now.  I am determined to lose 60 more pounds by the end of next year (2013) and have a plan to … “make it so.”  More details will be coming soon.
Thanks to the faithful readers for following the blog and for the kind comments made along the way.  Anyone losing weight knows how important it is to have a support network for encouragement.  People who live and camp in vans are no different.  There is plenty of accountability when a person knows 1000-1200 people a week are hitting this site and encouragement feeds success!

As always, thanks for visiting.  The next 60 pounds are going to take a lot more work but it is the right thing to do.  Please tell your friends about this blog and let’s see if we can motivate a few of them to do the same kind of thing and burn off some weight and get healthier.  It’s well worth the work.

Don’t forget what our friends, the “Vulcans” say….   Live long and prosper…  So, if it is within our abilities, is it not logical to try and “Live LONGER and prosper?”  And thanks for helping with both, Sis!

10 Responses to Results of the Weight Loss Challenge