This is Bower (or is it Bauer?) – the orchard’s mascot black Labrador. He is exceedingly friendly and loves beef jerky. I might just have a friend for life!

Fall is back… Just days ago, temperatures in Iowa were pushing 80.  Yesterday the high temperature was 43 degrees – a sign that winter is coming!  With a couple of days off, I decided to go camping and enjoy some time away from the big box seasonal job.  Of course, while getting the van ready for the trip, work tried to call me in…  Normally I would have said “yeah” and given up the day off.  Not so in this case… There is no need to try and earn brownie points…  I’m just the seasonal guy. 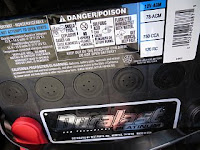 As luck would have it, the van didn’t start.  Fortunately it was in Dad’s driveway.  Since the air temp was only about 38 or so, if the battery was having trouble at this temperature, the problem was only going to get worse.  This was confirmed by a quick stop at AutoZone.

The old battery was a 600 cold cranking amp (CCA) size 78.  I bumped it up to a 750 and opted to get an absorbed glass mat type.  AGM batteries have a lower self discharge rate.  Since the van tends to remain unmoved for a week at a time, this seemed like a wise decision.  Spending more money for a bigger, stronger battery is not a bad idea.
The next stop along the way was at Cornell College in Mount Vernon – a city about a dozen miles east of Cedar Rapids along highway 30.  This school was visited a week or so ago by President Obama.  Obama was the first currently serving president to come to the college.

I saw a couple of cool signs in Mount Vernon.  The first was a good reminder that winter is not far away.  It was located at the top of a steep, long hill leading to the school. 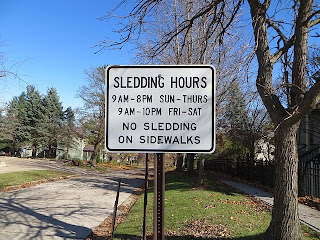 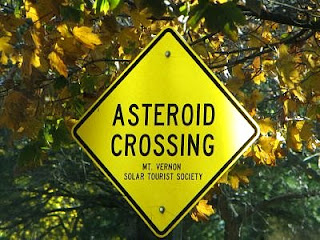 While sledding, also watch out for asteroids… As they say in Star Trek, “More power to the shields!”

After viewing the signs, lunch was consumed at the Lincoln Cafe in Mount Vernon.  If you look at their website, you will see the table I showed in a photo below…

This wonderful little cafe has amazingly delicious food…  It’s moderately priced but the fare is sophisticated.  The building is a small town storefront with interior brick walls dividing it from the other businesses.  The floor is hardwood.  Tables are the modern version of the traditional chrome legged, grey topped diner style.  The chairs are also have chrome legs and red vinyl seats.  I sat at the table near two beautiful old doors that decorated one wall. 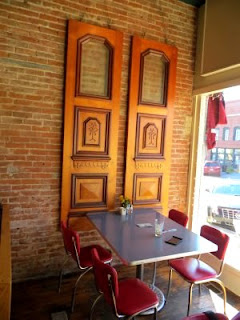 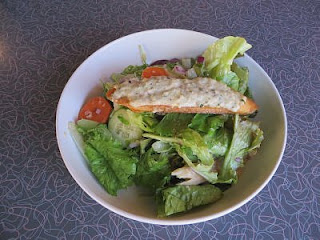 Lunch was a smoked trout salad that included a slice of grilled bread slathered with a delicious trout mousse.  I also had a bowl of their tomato – mint soup.  It was… minty… but the flavors worked! 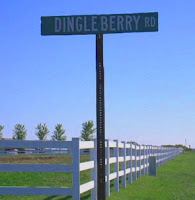 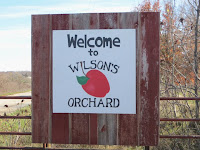 After lunch and while heading toward the campground, I couldn’t resist a visit to the apple orchard.

Wilson’s Apple Orchard is located on Dingleberry Road near Iowa City.  That is a story in itself.  A “dingleberry” is a small ball of …  poop … stuck to the fur of a farm animal (or human for that matter).

This road was named for a Yugoslavian family whose last name was difficult to pronounce.  The neighbors just called them “The Dingleberries.”  That was back before the days of “political correctness.”  There was a big effort to change the label for the road but it endured despite the objections of some, including the orchard owners.  I guess you can see why they don’t want people to think of balls of “doo doo” while looking for their apples.  Not surprisingly, this is the most frequently stolen sign in Johnson County, Iowa.

Wilson’s has about 9000 apple trees.  The early 2012 spring was a problem for the orchard.  The warm weather caused the trees to bloom early and then a frost wiped out nearly 97% of their crop.  They had to buy apples to support their own needs this year.
Wilson’s also grows pumpkins.  This is the closest field.  You can walk down there and pick your own – lots of fun!  Look closely and you can see the van in the distance.  Now triple that distance and that’s how far I had to walk to reach the back patch.  It was a nice workout, especially when carrying two pumpkins!  The back patch is close to where former U.S. Congressman Jim Leach used to reside. 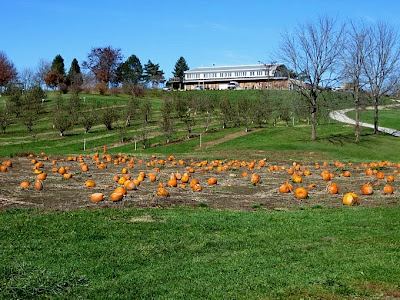 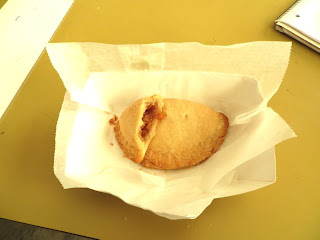 This hot, baked apple turnover necessitated the walk, just to burn off the blood sugar! 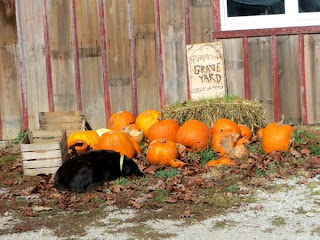 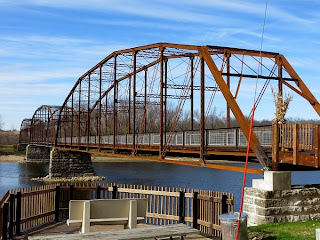 The next destination was the tiny town of Sutliff, about 15 miles north and east of Iowa City, along the Cedar River.  This beautiful bridge was knocked down by the great flood of 2008.  Mother Nature sure raised heck with a lot of us back then.  After a section of the bridge fell in the river, it was lovingly repaired and set back in place for all to enjoy.  Other than that, there is a tavern in Sutliff… That’s about it.  But they do have cold Blue Moon Belgian ale.  Yum…
At the tavern, I inquired about the location of the Cedar Valley Campground and a local asked why the hell I was going there.  I replied to drink a little and eat some chili.  He looked around and said “They got chili here.”  Good point.  But he then proceeded to draw me a map of a heck of a good shortcut to get to the campground using “Level B” (no maintenance) dirt roads near the east side of the river.  Level B roads range from decent to horrible.  I got lucky and these dirt roads were in great shape.

The map worked and before long I was at the Cedar Valley, just five miles north of Interstate 80 where it crosses the Cedar River.  This county campground is a little gem.  There was nobody there!  For $10, I was able to use their electricity.  Here are some photos from there… 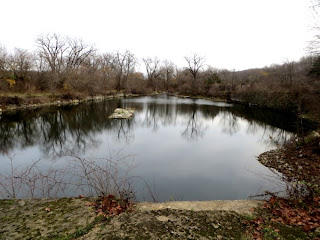 Fishing quarry next to the campground 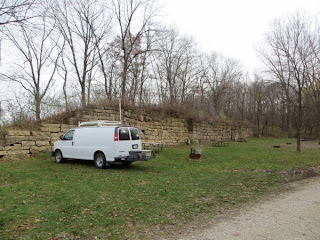 Here is a shot of the quarry as the sun was coming up.  It was peaceful and beautiful.  The tranquility was amazing, the air cool and crisp.  There nothing like a chilly night’s sleep in the country! 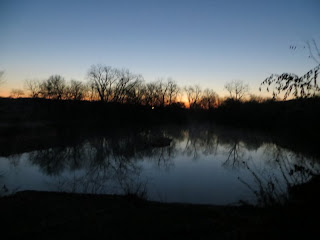 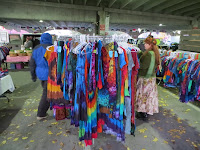 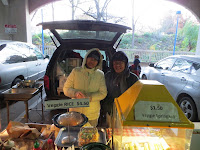 After packing up the van, I headed into Iowa City and visited the last Farmers Market for the year.  Mary was there with her cool tie dyed shirts.
Note the lady on the left in her cool Iowa City hippy, liberal, earthy chick type garb.  You see some of the neatest styles here.

The cute little Oriental couple sold me some awesome spring rolls and crab rangoon.  Great stuff!  I look forward to seeing the vendors next year.

I like Laura’s Lean Beef which is available at the north Cedar Rapids Super Target (a big box store with a great deli and a friendly, van trekking, seasonal guy) or beef available from your local meat locker.  If you have any questions, ask your local butcher.  Got any good stew, chili, or other fall recipes you would like to share?  Send me an email and we can post ’em here!

Also, for those of you who do visit your local Super Target deli, look for Applegate Provolone cheese.  I sell a ton of it and it’s the personal favorite.  It’s going to be featured in the next camping trip recipe.  Fantastic stuff.

Thanks for stopping by!  I hope you are enjoying this fine fall day.