Blogging? A Good Camera is a Must 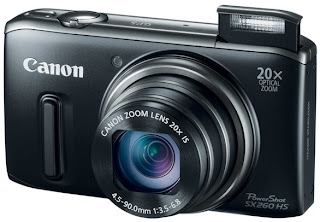 ﻿
For those of us who blog – or just travel and enjoy the outdoors, a good camera makes the experience richer.  For much of the time while working on this blog I’ve been using an inexpensive Kodak Easy Share camera.  It’s provided some decent pictures but when light was waning or an object was distant, the camera came up short.  There was nothing more disappointing than crappy pictures on a memorable trip!
I accidentally dropped the Kodak one day, damaging the zoom button.  If you turned it, you got maximum zoom!  The screen was broken as well.  It was time for a replacement.  Thankfully, with Christmas coming, my sister and brother-in-law agreed to help me out on the new Canon.  I ordered it a little early and am enjoying it very much!
After a great deal of research, I decided that the next camera for the van should be the Canon SX260.  It was the highest rated model in this price range and boasted an impressive zoom, excellent picture quality, and good night photos.  Various outlets were selling them for $279 but I got it for less at Amazon.  (It was cheaper than using my employee discount at the local big box store).  After traveling all over the midwest, the new toy arrived in a mere ten days.  Ya gotta love the free shipping that comes free with Amazon… 10 days to go 800 miles (/end sarcasm) 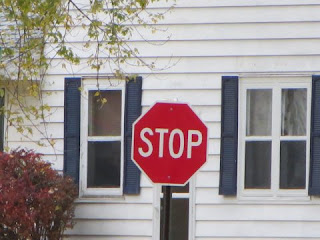 One of the first pictures taken was this stop sign. Okay, so it’s a stop sign.  Big deal.

But the stop sign is about a block away.  It’s five houses away from where the van is parked.  Not bad!

The Canon has a 20:1 zoom and a 4:1 digital magnification.  In effect, it’s an 80:1 zoom.  The effect is extremely fast and smooth.  I could use it to read signs unable to be discerned with the naked eye, even with 20-20 (corrected) vision.

At that range, it is difficult to get a good picture.  The Canon has image stabilization software and it works great.  Still, you need a tripod or a steady hand at extreme distances.  Backing off the magnification just a bit will yield better pictures. 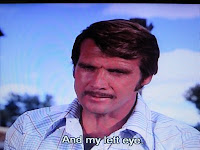 I’m watching an old Six Million Dollar man episode at the time of this posting.  The picture you see here was snapped in “TV mode” from the Canon.  For those who remember this 1970s show (starring Lee Majors), his “bionic eye” was rated at a 20:1 zoom.  If the bionics creator, Dr. Rudy Wells, had the ability to do a digital zoom using that eye way back then….

Oh well….  It’s just sci-fi!  Cool show though… even in 2012.  This episode was called “The Bionic Boy” and starred Vincent Van Patten as well as his son Dick Van Patten. 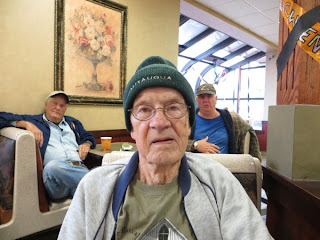 This next photo was taken at McDonalds… Here are the morning coffee drinkers.  To the left is George, the guy who is constantly working on an early 1980s Dodge truck every bit as important to him as my van.

The guy in the front is my dad.

The person with the blue t-shirt is Jeff.  He’s a small engine expert and has a half dozen garages full of lawn mowers, snow blowers, you name it.  If you need a part, Jeff can find it.

Actually, all of us in the morning group of coffee  (and Diet Coke) drinkers are experts in some way – or we think we are.  We loosely call ourselves the “bullsh**ers club”.  I just wanted to show you that even with a lot of sunlight coming in from the south, the Canon did a decent job showing all the faces.  The old Kodak would sometimes  saturate a little when the light was strong. 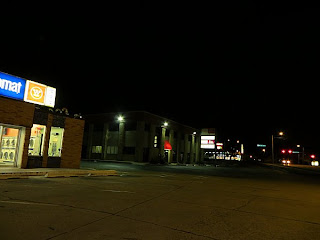 Campers love sunrises and sunsets.  Unfortunately, the old camera did a poor job of capturing those beautiful moments.  In its defense, the Kodak worked pretty well on most occasions.  But this camera handles night shots like a pro.

I took this picture at 4:30 AM, long before the sun came up.  Had I been using the previous camera, the picture would have come out as solid black with no detail available.  This photo was taken on the “auto” setting of the Canon.  The gas station is a block away.  The office building is about a half block from the camera.

So far so good…  The expectations were set high for the SX260 and it met or exceeded every one of them.  The compact size is about like a pack of “120” length cigarettes… (slightly longer than a box of Newport 100s)  It is a bit heavy with all that lens hardware but certainly manageable.

On the downside, there are a few things I wished were different but they are far outweighed by the positives.  Some of the less desirable aspects include battery life, the flash, and the documentation.
The battery life is a little shorter than I would like.  You’ll want to order an extra one or two rechargable batteries (you can get them for $6 apiece (no shipping) and keep one on the charger all the time.
The quick start documentation isn’t the greatest.   It is not very detailed and you almost need a magnifying glass.  The main manual comes as a PDF on a CD…  Oh joy.. That doesn’t do anything for netbook users like me!  Nonetheless, you can get the documentation online, too.  No biggie. 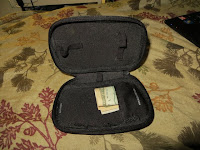 The flash is oddly located on the top left side.  It pops up as needed.  The user needs to learn to place his/her left finger differently to avoid getting in the way of the flash.  Again, it’s a minor inconvenience.

It is certain you will want to have a case for a camera like this.  I am using a padded carrying case for an old Accucheck blood sugar tester.  There was a zippered compartment that had to be cut out so the zipper wouldn’t scratch the view screen.  The small elastic compartment lets a person tuck a key or a few bills inside.  I thought I’d show you this as an idea.  Anyone who has been diabetic for a while is likely to have one of these extra carrying cases laying around…  They work great!

The camera will get a good shakedown this weekend.  I have a couple days off from the deli and plan to go camping but am not sure where yet… likely Hills.  The weather is going to turn cold so the chili referred to in a previous post is going to get made.  Man, will that taste good.  And now there will be some great pics to go with the recipe.
Thanks for the camera, Sis!  It’s going to come in handy for the blog!
Also, thanks to the friends who have been stopping by.  Some of the visitors are other bloggers or simply have an interest in what it’s like to live and sleep in a van.  Feel forward to email any topics you might like to have covered on this blog.  If you are interested in writing a non-commercial guest post, please let me know (brad52317@aol.com).  It’s a good way to get more traffic on your own blog by linking to it from this page.
Take care and enjoy the rest of your week.
Bradford, the “Van Trekker”
The biggest “turkey” in the local big box store deli
﻿
﻿