It’s the Christmas season and the plan was to pick up a couple of tires for the van.  It didn’t work out that way.  A new gadget had come along that had the potential to make camping a lot more fun.  I didn’t see anyone on the Cheap RV Living Forum website who had one so apparently this will be one of the first reviews for thhis device in the vandwelling community.  The tires can wait a bit!

What is the one thing that is nearly a universal desire among frequent campers?  A hot shower.  But not all of us who convert vans want to drill holes, run pipes and hoses, etc.  Plus, there isn’t always room in a tiny camper to add gas and water plumbing.  Someone recently mentioned the Mr. Heater Base Camp Aqua Cube on the Cheap RV Living Forum site and it has turned out be a perfect solution for the needs.

The box arrived a couple of days ago and was packaged beautifully both by Mr. Heater and then tightly packed into a second carton by Amazon.  It arrived in just a couple of days.

The Aqua Cube is easy to use and setup takes very little time.  You spin on the 1 pound tank of propane, connect the shower (or swing out the dispenser tube (for washing dishes – just like a kitchen sink!), and connect the pump to a water source.  You can even connect the pump directly to your water tank (if it fits – mine didn’t).  I chose to use a 5 gallon bucket of water and, per the directions, submersed the pump assembly. 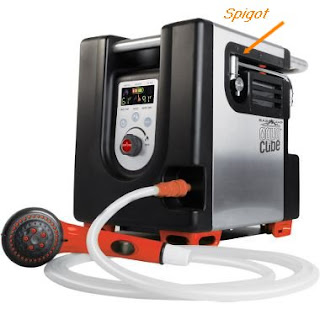 Then you press the “on” button, select the button for the desired output (shower or spigot), and dial the temperature adjustment to somewhere between minimum to maximum.  An on/off lever on the shower handle lets you start or stop the stream.  Also, a safety cutoff shuts the burner off if the water temperature gets too hot.  If it’s cold outside, you might need to run the output water through the input for a while to build up the temperature.

The inlet water pump runs on a rechargeable battery pack.  I’ve read that it lasts about 20-30 minutes per charge.  It will last less time in the winter if you have to take extra time to recycle and heat the water.  The shower I took did not drain the battery significantly.  It consumed about 3.5 gallons of water and took about 4 minutes, probably ten minutes total including heating time.  The temperature did vary a little bit but usually between hot and quite hot.  (By the way, did you know most people shower at 107.5 degrees Fahrenheit?)

Periodically the flow slowed a bit as more water was being heated.  But overall, the darn thing worked great and the pressure was adequate.  It’s not going to blast the skin off you but there is enough pressure to get the job done.

Here is the video I made… At the end it does contain an amusing shower sequence though every effort has been made to keep it G rated… I might buy one of those little pop-up shower enclosures but for the time being, a person had to improvise just a bit.

In addition to cleaning the body, there are other uses for this device that might make a person reconsider the need for hot water:

I’m not going to say this is a perfect solution for everyone or urge anyone else to rush out and buy one.  It does require a little setup time each time it is used.  You also have to make sure you’re in compliance with any laws regarding water disposal.  Also, the Aqua Cube is not cheap.. Then again, add up what it costs for an on demand propane heater, pump, and tubing.  With something plumbed in you still don’t have the flexibility that you have with the Mr. Heater version.  Though Coleman has a similar product, the Mr. Heater Base Camp Aqua Cube unit has received better reviews.

I hope this page helps others who are considering this product.  Check out the reviews and prices on Cabella’s and Amazon, as well as other retailers for camping products.