Using a Larger Tank with the Mr. Heater Buddy

By VanTrekker | December 11, 2012 - 8:35 AM |December 11, 2012 Mr. Heater Buddy, propane
0
SHARES
ShareTweet
WARNING!!!  This information is provided only for your entertainment.  It is dangerous and in many places illegal to use a large propane tank in this manner.  DO NOT TRY THIS AT HOME.

﻿
The Mr. Heater line of propane heaters is one of the most popular ways for vandwellers to keep warm during the winter.  I have two of these wonderful machines – one in use, and one in storage.  They do a great job at all temperatures and allow me to boondock camp without the need for electricity.  There is only one problem – the little heater lasts only about six hours on a one pound, spin-on can of propane.   The small canisters are expensive and always seem to run out right in the middle of a good night’s sleep. 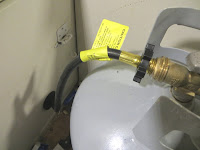 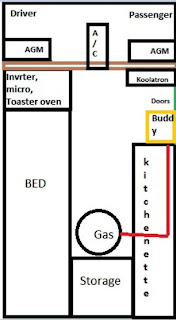 To show the readers how I added a larger capacity tank, it is necessary to detail the layout of my van.  The left side contains mainly the bed.  The right side is primarily for the kitchen counter.  Immediately to the front of the counter you will find the cargo doors.  The Mr. Heater Buddy is mounted to the rear-most swing out cargo door on the passenger’s side.

I decided to rig up a way to use a 20# propane tank for the winter months.  It is sitting between the bed and the kitchenette.  The hose is routed through the bottom of the kitchen counter and out through the far side (near the heater).

To accomplish this, I purchased a Mr. Heater brand 10 foot hose, model F273704.  The less expensive hoses require the use of an inline fuel filter.  This is because the cheaper style hoses can ooze a little oil as line pressures build up.  That can cause problems at the heater.  The F273704 is a “non-plasticizer” type material, doesn’t secret the oils, and thus no filter is needed. 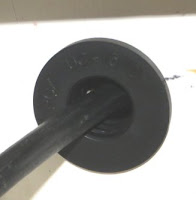 For safety reasons, it is not a good idea to run a hose inside an enclosed cabinet. I was particularly concerned that at the entry and exit points the rubber might get chaffed and the hose leak.

To deal with the potential for scraping, I drilled 1.5″ holes (large enough for the connectors to pass through) using a hole saw attached to a drill.  At the local Ace Hardware, I located these very large rubber things… I guess I will call them grommets but they are more like bushings.  They snap into place and protect the hose nicely.  The amount of isolation from the wood edge to the center hole is around 3/8″ of an inch.  It worked out great!  The best part is that by opening and closing the van door, the hose slides in and out a bit so no strain exists.  Then when the weather warms up in March or April, I can just unhook the hose and store it inside the kitchen cabinet.

The propane tank still needs to be secured before the van is put in motion.  I’ll likely add some screw eyes and tarp straps to keep the tank from moving.  At the end of each use I turn off the propane valve by the bed and let the Mr. Heater run for a few seconds until it burns off the last of the vapor.  Then I also turn off the heater to make help ensure no gas leakage.

A one pound can of propane lasts about 6 hours on the low setting.  This 20lb tank will run between 100 and 120 hours and costs less than half the price!  That is also going to make boondocking much easier this winter.  No more waking up to switch little tanks in the middle of the night.  🙂

BUT ONCE AGAIN…. DON’T TRY THIS APPROACH.  It could result in a fire or explosion.  For that reason, this idea was provided only for your entertainment.
At the moment, it’s 77.5 degrees in the van… 19 degrees outside.  I’ll take the risk.  Just use extreme care any time you are working with propane.
Thanks for stopping by.  Have fun!

6 Responses to Using a Larger Tank with the Mr. Heater Buddy