Okay, Serena wasn’t exactly enjoying the slide but sure had a lot of fun in the playground.  We are in Muscatine, Iowa tonight.  I’m working through a number of issues at the moment including the viability of kitty Serena, my 14 year old, being a vandweller.  She’s adapting pretty well.  We’ve explored a number of parks and had a good time in the process.  Serena has given me some helpful feedback about what works for a kitty on the road.  The next post will have some tips learned about what she prefers and some thoughts I had regarding a traveling pet. 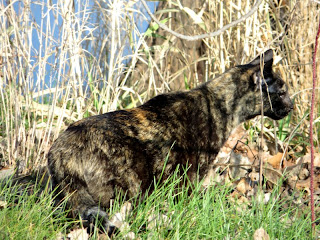 Sunday was spent in Iowa City doing laundry and exploring at the favorite Hills Campground.  The cat enjoyed the park and explored to her heart’s content – never straying very far.  Supper was a tasty dinner of ham and split pea soup cooked with the van’s crockpot.  (Just 1 shallot, 6 oz green split peas, about 3 cups of water and after cooked down, I added 8 ounces of diced ham and some salt and pepper to taste).  For $3 there were two large servings.

Iowa City has an awesome Anytime Fitness location.  It’s best to visit at 8:00 or 9:00 when station WGN runs a terrific murder/mystery show.  I’ve learned that the TV show “Matlock” and the elliptical machine make a perfect distraction and the cardo workout flies by. 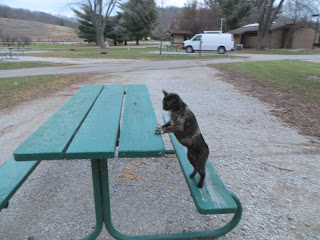 After the workout and a couple of quick errands, the kitty and I headed east to the town of Muscatine, Iowa.

Monday’s weather was nearly 70 degrees – a rare event for December in Iowa.  We camped for $11 (including electricity) at Fairport State Park which is right on the mighty Mississippi. I explored the park at our evening destination, taking the feline friend for a ride on a two person swing overlooking the river.

Tuesday night (tonight) we will be returning to the same park.  For the price, a person is hard pressed to find a better camping deal!  With the cold Iowa weather returning, electricity is a necessity.  I can heat the van with propane but camping in a park with electricity means heating more safely, ensures no police hassles, and does not cost that much more… Let’s see… One can camp in parks for 5 days for what the Super 8 motel down the street charges for just one night!  It’s a lot more peaceful, too! 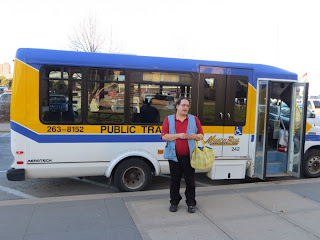 Monday night’s sleep was peaceful, even with trains rumbling past the campground on a regular basis.  Tuesday  I spent the day with my buddy Johnnie, one of the nicest and most colorful guys you will ever meet.  He’s also the least judgmental person I know.  That’s why we hang out when of us is stressed or down in the dumps.  We’re both a little bit nuts.  Or squirrely.

When I met up with him, Johnnie gave me two presents… One was a cool sun visor organizer which is PERFECT for the van… Now there will always be a working pen within reach for registering at the campgrounds.

The other present was a cat calendar which will go on the back of the bulkhead door.  I thanked him for both gifts.  What a great friend!  I vowed to myself to visit Johnnie more frequently.  Too often I’ve tried to be a loner and shut friends out.  So what does a person do who doesn’t have a lot of friends?  He writes too many blog posts.   🙂

Johnnie and I rode the city bus all over town and went walking along the river.  It was a blast.  What is special about riding a bus?  I haven’t done it since the early days of the Ronald Reagan presidency.  Muscatine’s public transit buses (“Musca-bus”) are Ford F450 shuttle buses.  Talk about van envy!  I quietly thought to myself while glancing around that there was room for a double bed, kitchen table, recliner, drop down big screen TV… you get the idea.  The only bad thing would be having to wash that many windows…. and the gas mileage.
Lunch / supper was had at the Guadalajara Restaurant.  Their special was $1 tacos – the authentic, soft corn tortilla variety with cilantro and onions, with your choice of chicken, steak or beef.  They were incredible.  Johnnie is part Mexican so we usually hit the Mexican places.  With a large Latino population in the area, there are some fine places to go in this town.  I thought to myself tonight, Muscatine would not be a bad place to live!
I dropped Johnnie off a little while ago and decided to work on the blog post a bit.  Life has been a little stressful since announcing the plan to move to the country.  But that’s okay.  The Koolatron is loaded with food and there’s no need to return to town any time soon, no worries about war with Syria, no fiscal cliff to fret about.  All the problems of the world can wait.
Thanks for stopping by, as always.  If you are ever passing through Iowa on a camping trip and want to hang out, please let me know.  Nobody is a stranger.  That’s just our way here.
Brad and kitty Serena, the “Van Trekkers” 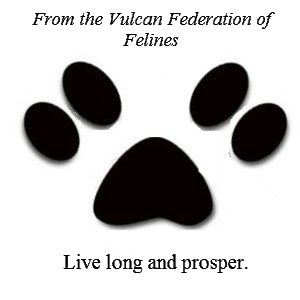