Working at the Gas Station

A reader recently left a comment and asked if I was working at a new job.  The answer is yes.  I have stayed pretty quiet about the employment thing though.  The reason is that I wanted to give this job some time to see if it would work out.  So far things have been going well.

It took a while to find something that would work.  I’m not going to write a long rant (okay, a short one) about how bad some jobs are but if you haven’t worked at an entry level, low wage position for a while, it’s not like you remember twenty years ago.  Many treat you like crap because workers are plentiful.  Even during the recession, such jobs have been, too!

Some mistreated employees return the favor by treating the employer with as little regard.  I’ve had bosses at the last few jobs lament about how people quit as fast as they hired them.  In the back of my mind I was thinking there must be a reason.  After the “honeymoon period” (two or three weeks), I found out why the predecessors bailed out and the door didn’t hit me on the fanny.

I’ve been a job hopper at times as well as having friends who got a job, worked at it a month or two, and then moved on.  The truth is there are a lot of shi**y, low paid, overworked jobs out there. 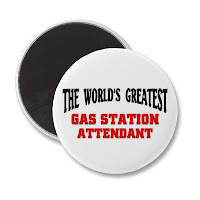 As a former supervisor I know that if you treat employees well, most folks will give you a notice before departing.  But I don’t blame some of them who quit without a notice – especially those who got screwed over.  Stuff happens and bosses reap what they sow.

With a little luck you will find a position and a manager you like.  I sure drew a lot of short straws before finding something a little better.  I’m working for a convenience store chain in Cedar Rapids at multiple locations.  This gig is better than most… and the position is a pretty good fit for the van living lifestyle…

So why is gas station work helpful for a vandweller wanting a modest paycheck?  I’ve listed some positives in no particular order…

So there it is… Yep, I’m working 30 or so hours in a gas station and asking “Will that be credit or debit?”  It’s enjoyable work and has proven to be helpful for this vandweller.

Thanks for stopping by!

9 Responses to Working at the Gas Station