**** NOTE –  Blogspot has been “eating” my comments.  After I approve them, they are not getting posted.  My apologies to the kind friends whose comments are vanishing, particularly Tina and GabeVarga. (as well as others) ****
Tuesday was a stressful day.  I had decided a camping trip was needed.  My nerves were smashed and frayed like the lamp cord under Granny’s rocking chair on a hardwood floor.  Nothing cures a bad case of stress like a good steak and a couple days with friends.  I decided to take off for Muscatine and visit my old buddy Johnnie.  But a dangerous winter storm and a sudden family emergency stopped those plans.
On the way to visit Johnnie, I took a northerly route, driving through they drier portion of the storm.   Unfortunately, the local weather stations as well as the National Weather Service were caught off guard by the fickle snow event which decided to pick and choose who got dumped on.  Winter storm warnings were issued and canceled, then re-issued and canceled, including where I was passing through on the old “Lincoln Highway” (Highway 30).
﻿
About 50 miles east of Cedar Rapids, I made the decision to call it a day and camp out.  The road conditions were deteriorating too quickly to keep driving.  As luck would have it, I discovered the Syracuse Wildlife Management Area (near Wheatland, Iowa) just a half mile to the north of the main road.  It offered safe parking, a shallow climb back to the main road, a spectacular view of the Wapsipinicon River… and, of course, FREE CAMPING.  I didn’t realize until afterwards that the bridge was actually part of the historic old “Lincoln Highway”.
The picture you see above is the van parked on the riverbank above the boat ramp.  It was the ideal parking spot and allowed for gaining some momentum on the departure run. 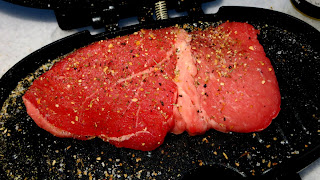 After I got the van set up, it was time to cook dinner in the heavy snow.  The Honda generator provided the power to cook up this tasty little sirloin on top of the generator box.  I seasoned the heck out of it with coarse salt and pepper and closed the lid on the little electric grill.  You can’t beat a medium-rare piece of “corn fed” Bessie the Cow on a cold, snowy winter night.
I kicked back with the steak, cranked up the Sangean radio, and listened to radio stations from Tennessee and Minnesota as well as the old favorite, WLS in Chicago.  It was starting out to be a good night.  As the wind and snow buffeted the van, numerous trains thundered by with their traquilizing, bassy rumbles.
Around 9:30 the phone calls started pouring in.  Sis had been unable to reach Dad all night.  We sent the police to check on him and he had fallen in his house.  Thankfully, nothing was broken but Dad was taken to the hospital for observaton.  I also had two calls from the emergency room doctors.  Unfortunately, I could not depart due to the bad roads.  It was kind of a helpless feeling.
This morning I ventured out on snow-covered roads and got to see Dad at the hospital.  He is very frail and there is some question among the healthcare folks whether or not Dad will be able to return to his home.  It’s a shame… and it’s tough watching a loved one decline.  It’s hard to say how long Dad will be with us but no matter where he ends up, it’s a certainty there will be a white van parked nearby.  I’ll be keeping an eye on him.
So the camping trip really didn’t relieve any anxiety after all.  I ended up with a migraine today, mainly due to stress.  But I discovered another beautiful place to quietly camp and relax.  It was worth the drive through the snow, white knuckles and all.  Iowa has some gorgeous, tranquil wildlife management areas that most people don’t even know about.  They are worth seeing if you are passing through the state or escaping the city.
Have a good one and thanks for visiting.  Enjoy each day with your family.  We never know how long loved ones will be with us.
Bradford, the “Van Trekker”