Upcoming Trip – Something to Look Forward To!

Hello and thanks for stopping by.  Thanks for the many kind words as well as the prayers.

It’s been a busy couple of weeks… well, that’s an understatement!

I’ve been working like crazy on Dad’s house and have already tossed more than 2300 pounds of junk and such.  Today’s effort was significant.

But first, I took the time to make some cute little bunnies.  All you need are some Twinkie knock-offs (Little Debbie “Cloud Cakes”).  Cut out a rectangle, put a marshmallow “Peeps” bunny inside, and cut some large marshmallows into “wheels” by slicing them laterally.  A little frosting holds it all together.  A mini pretzel makes a perfect “steering wheel.”  Due to errors, I ate two broken cakes and the old tomcat, “Mr. Jesse James”, ate most of a cloud cake as well.  That cat…   The old girl, Kitty Serena, was batting a marshmallow around the floor.

A little fun was needed and the bunnies provided that.  It has been a tough week.

Dad landed back in the hospital again and was gravely ill but has recovered enough to return to assisted living.  I’m continuing to work on getting his house in shape for whatever we need to do in the future.  Along the way, I have discovered a few antiques and other items.

Antiques are nice but they are what they are – old, signed glassware and China pieces that are worth a few bucks to someone who has the room for them.  I’m slowly wrapping them carefully for a future disposition.  But there are other items worth more to me.

Along the way, I found some items that have no monetary value yet are priceless!  Dad saved numerous photographs over the years, including one of Lemuel Harris – my great grandfather – sitting there looking happy with a bushel basket of potatoes in front of him.  It’s a classic “Iowa farmer” type of picture.  When I get time I’ll post it.  Cousin Florine and Dad both stored a lot of pictures and they have brought back many memories.  It’s worth getting a little grubby to unearth such treasures.

So as I clean and sneeze and pack and wheeze, the house is looking better and better.  It is slow going.  Each day only sees about three hours of activity, often broken into a couple of shifts.  I’m highly allergic to dust and it’s not an easy job.  But doing all this work myself is saving a great deal of money that can be used for Dad’s health care.  It helps a person’s self esteem, too.  Instead of thinking I’m a lazy slug who can’t hold a job, I’m doing a tough one for no pay.  It makes me wonder if self-employment might be a better direction in the future when all this is done…  🙂

A break will be coming soon, at least.  Sis will be here in early April and I have a trip all planned.  Of course, it will involve traveling north to the Elkader / Decorah area.  Serena (the tortoise shell cat) is going with me.  Currently she sleeps in a tiny pop-up dog tent that resides on Dads living room floor.  What an incredible little girl!  She likes the van… which is also seeing some changes… 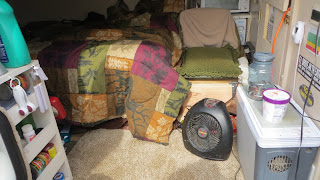 Here is a new carpet that I bought for the van at the local Walmart.  It was necessary  because the old carpet square was small and slipped on the linoleum.  A month ago that happened and I was launched out of the van and into a snowbank.  The only casualty was that I fell face first into the snow, crushing a 32 ounce cup of Diet Coke and soaking my shirt.  What a shame!  This new carpet is 23″ x 47″.  The right side fits under the Koolatron.  I cut a notch into the left side to fit around a shelf.  It’s not going to be sliding anywhere!  It feels nice on the feet, too!  Cost?  $10.

On this next trip I have some exciting new recipes to try.  Most will involve the use of the toaster oven.  I was going to buy a Texas type muffin pan and cut it up.  Instead, I purchased some stoneware ramekins to bake with.  Here are some of the ideas I’m considering making…

Don’t these new recipes sound like fun?  Stay tuned.  If I get around to making any of them before the trip, I’ll put them on the recipes blog.

That’s about it for now.  Time to get back to cleaning.

Thanks for visiting.  I should be posting something around the 3rd or 4th of April.  Have a good one!

7 Responses to Upcoming Trip – Something to Look Forward To!