Here we go again… Time to change TV antennas one more time.  On the last trip to Dutton’s Cave park, the old antenna was damaged when I bumped the roof of the “Barrel Drive-in” restaurant.  It wasn’t until later that I discovered that no channels would come in.  It was probably a broken wire where the coaxial cable attaches inside the antenna.  Grrrrrr. 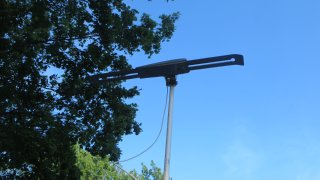 I decided that something better was needed.  The boomerang had served me well, but as a non-amplified solution, it did not always provide  reliable signals.  With the exception of the park in Decorah, trout streams are not often near civilization!  The next antenna would need to provide more gain and allow me to store it flatter – at least below the level of the solar panel.

The goal was also to allow for a quicker, hinged approach to erecting the antenna.  The old implementation required a bit of a stretch and several times I fell off the step of the van.

The Winegard GS2200 Sensar III antenna was intriguing.  Despite being a little turned off by the resemblance to a Klingon Bird of Prey ship (just kidding but you know the author is a Star Trek nut), I saw that this antenna had received glowing Amazon reviews.

Some of us (myself included), prefer to read dozens of online opinions before buying something.  Once you filter out the 1 star reviews from people with agendas, as well as the 5 star comments written by people who think a mechanical pencil is a new invention, some of what is published is actually helpful!  I can’t pass up a bargain – for about $55 or so, I ordered the highly rated Winegard.

The new toy arrived in a rather long box.  One Amazon reviewer was correct – this is a good sized antenna.  It’s looks huge on a Chevy Express van.  I’d recommend it for taller vehicles where the antenna is less noticed – like on a tall RV or a Sprinter van.  It’s by no means stealthy.  But the darned thing works… and it works very well!

It took only minutes to hook up.  Predictably, the amplifier is located inside (near the TV) and is fed by a strange 120 volt power transformer – one with a coaxial F connector for its output!  One note – the amplifier draws a maximum of 24 watts – about 2 amps at 12 volts.  Add that to the TV’s power consumption and it might change your mind about buying this system.  But the darned thing works.

I did a channel scan with the antenna sitting on the old mount and picked up 23 TV channels – nearly all of which were at 100% signal strength.  The old boomerang antenna usually only grabbed between 14 and 18 (depending on if the roof vent was running, it the wind was blowing, etc.)  The new results were impressive and I decided this Klingon-looking TV channel grabber is a keeper! 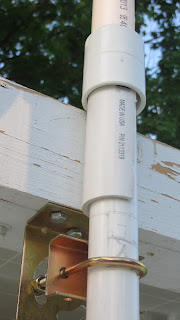 One of the goals was for easier erecting of the TV antenna when in camping mode.   For the lower end, I used (more like mis-used) a TV antenna mast bracket that allowed the pipe to swivel 90 degrees (from vertical to horizontal).  By employing locking nuts and utilizing a little slack, there is enough movement to be able to pivot the pipe.  I will go back and add some fender washers so it looks more stable.

The top end is where things got creative.  I used a chunk of PVC for a mast.  I believe it is 1″, a size that fits nicely inside the next larger tube.  I used that to my advantage.  The slightly larger tube was cut lengthwise and sanded down, then fastened to the solar panel mounting board.  It is pretty sturdy.  As you pivot the antenna upward, the mast snaps into the half-tube.  Then I use a PVC pipe coupler that slides down over the whole thing to lock it into place.  It takes just seconds to erect!  How sturdy is it?  Sturdy enough to withstand Iowa  thunderstorm winds.  Don’t drive anywhere with it up though!

When departing, just raise the collar, tilt the mast down, and  away you go.  (Actually, I like to secure a small bungee from the mast to the roof rack to keep things captive when driving.)

It sure is nice to have a more robust TV viewing solution – and one a little quicker and safer to erect.

Like everything about my van, this is a redneck solution and it may or may not work for you.  But if it gives a person some food for thought and you can think up something that works better, then the blog has served its purpose!

Things are still going great at the railroad van driving job.  It is lots of fun and the money is flowing nicely.  I’ve been over 40 hours every week so far… more like 55!  At the moment, I’m waiting for the next train’s crew so there are a few hours of slack time.  Easy money!

Some day if things calm down a little, I’m hoping to head to a nearby campground and do a little fishing… and TV watching.  In the meantime every day I thank God for having a cool, interesting, and enjoyable job that is a good fit with the vandwelling lifestyle.

As always, take care and thanks for stopping by!  Happy Memorial Day!

4 Responses to A New TV Antenna Packs a Whallop