A Whopper…. And It Didn’t Come from Burger King…

It’s been a stressful week.  I put in 110.5 hours at the job over the last two weeks.  Then, all of a sudden, business conditions changed and I’ll be luck to get twenty or thirty hours per week in the future.  That’s okay.  Too much work and no fishing is no way to enjoy life.

I got called in on Monday night and did the railroad crew transport thing.  That worked out perfectly.  Once I was on a mandatory rest break following the trip, the “day off” began immediately after…  They can’t make me work…  🙂    It doesn’t always happen that way!  The van was already packed to go.

I headed for “trout country” with no destination in mind.  That is the best way to do it.  Joy Springs park (near Strawberry Point) was set to be stocked with trout so it meant an easy five fish – especially since it was raining and there wouldn’t be many people at the park.

I caught four fish and a ton of mosquito bites in short order.  I kept losing fish after fish.  It seems like that last fish – the fifth – always proves elusive.  I’m greedy and don’t like to leave without the limit.

The only bad thing that happened was that I tried to avoid crossing the stream and decided to hike up some steep embankments.  The rich Iowa soil was greasy from the rain and I fell very hard, first going forward and somehow landing on my bad rotator cuff and neck.  It was funny until I looked to my right and saw that a foot away was a sharp end of a small tree that had been cut down.  It would have likely pierced a lung.  I stopped and gave thanks to God for not dying right then and there.

Note to self… Get some boots!  On the way back, I took the other option… crossing the small stream with mid-thigh high water.

So here is how the trip actually started.  The picture below was taken at the HyVee grocery store in Marion, Iowa.  I was using the van’s metal box to prep asparagus and green onions for a new recipe – Asparagus and Cheddar soup.  It is featured on the other blog http://vantrekkersrecipes.blogspot.com/

Once the veggies were in the crockpot, the van was underway.  By the way, much to my chagrin, I found out that this grocery store – just ten minutes from home – carries Nordic Norm’s Kringla.  The waistline and blood sugar are in trouble.  A few months ago, I could only find the exquisite Norwegian pastry in Decorah – 100 miles away!

After the fishing was over, it was time to settle down for the night.  A change of scenery was in order.  It gets boring camping at the same old places.  Since I was near Garber, Iowa, it was a short hop over to Motor Mill park.  This is the site of an old grain mill, hotel and livery, etc.  They just put a bridge over the mighty Turkey River, apparently replacing an old structure. 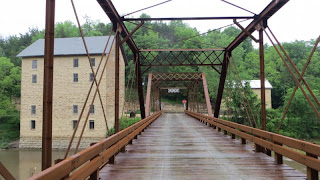 Below is an old turbine.  A sluice gate would control water flowing into the turbine and help limit the speed of the grinder.  In ancient days, you can imagine how a straight channel to the river would make the grinders spin when flood waters would hit! 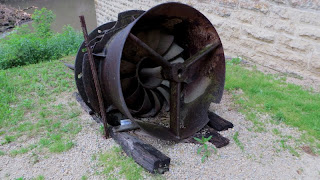 Here is another view of Motor Mill.  The Turkey River is brown because it is high from late spring rains.  It apparently flooded recently – a near yearly occurrence for this waterway.  The river passes through very hilly terrain.

This area is just upstream from “Tickletown”.  I likely mentioned it here before but with the river flooding the towns of Garbor and Elkport so frequently, many years ago some people moved their houses higher on the hill.  The residents called the area “Tickletown” because they were tickled not to get flooded.  Tickletown is not on any maps! 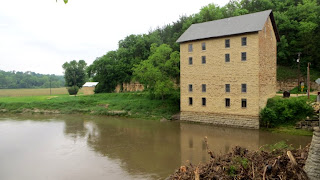 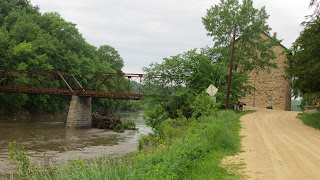 Below is the campground at Motor Mill.  It was ten dollars a night without electricity.  That’s not too bad, I guess.  I was (and still am) stiff and sore.  Though it was a peaceful place to camp, sleep didn’t come too easily.  The shoulder was aching. 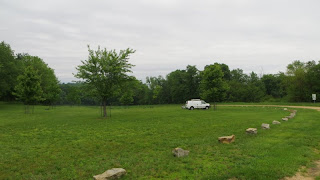 The dinner meal was enough to put my lights out.  As an appetizer, I made hummus using the immersion blender.  A regular blog vistor, Steven, has asked about making hummus so I gave it a shot.  It needs some fine tuning but I really liked the results.  Don’t make hummus in a shallow bowl.  The blending process had it on me, the walls, bed, etc.  Use a very deep container!

The recipe for the hummus is also on my other blog.

By this time the soup had been completed, blended, and I was surprised by how good it was.  The trout (Big Mama) was tasty but it was the simple, delicate soup that really stole the show!

I’m headed back to Cedar Rapids right now.  The weather is cold and rainy and I need to rest up and go see the chiropractor.  Though it was another short camping trip, this was a blast.  Each day living in the van dwelling lifestyle is proving to be increasingly enjoyable.

Reader Steven made this trip more fun with his suggestion of making hummus.  I’ll be doing that again and sharing the results.  If anyone has any more cool ideas for camping food, please let me know.  I like to cook (and eat) and enjoy spreading what’s discovered.

So what’s next?  I plan to make some soup when I get back to Dad’s.  The striped tomcat, Mr. Jesse, loves shrimp as much as I do.  The next soup will be a shrimp bisque.  He’s gonna be one happy kitty!

Thanks for visiting and riding along.  Take care and most of all, enjoy life!  Fish more… work less!

5 Responses to A Whopper…. And It Didn’t Come from Burger King…