It’s Sunday morning and it feels like a steam roller ran over me.  This is one of those times when a person has to ask, “Am I told old for partying like this?”  Thankfully, there was no booze at this occasion – just a handful of fun, feisty people.

Sis and I had decided to throw a party at the nursing home for Dad’s 83rd birthday.  He’d been kind of tired, confused, and sleeping a lot lately.  The festivities really perked him up, as did the tasty food.

The dinners for everyone were ordered from the LoneStar Steakhouse.  LoneStar does a great job.  They even threw in a free appetizer for Dad’s birthday.  Everything was on time and fresh, too.  Most of the others wanted steak but the baby back ribs proved irresistible.  You can imagine the stares as I hauled four large bags of styrofoam food containers into the care facility.  One of the nurses said you could smell it all the way down the hall. 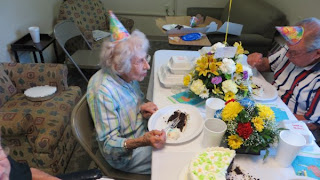 Our small contingent included Ella Mae, a neighbor lady who will proudly tell you she is 97 years old and was born in 1916.  She likes to joke and say she looks every year of her age but those who know the real number will tell you she doesn’t look it… or act like it.  Ella Mae is hillarious!  She had three scoops of ice cream, reminding us of her age and she does what she likes!

As the party came to an end later in the evening, Ella Mae forgot her cane and had to walk back for it.  Wouldn’t we all like to be that spry at that age? 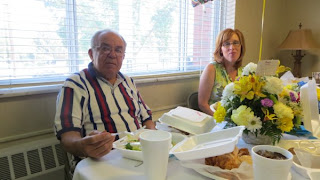 The pretty red head, Corrine, is Dad’s neighbor.  Her father was from the Elkader, Iowa area -where I so often go camping.

Last November her father passed away.  Dad and I went to the funeral and I went out afterwards to go trout fishing… in true Harris form.

Corrine, a fantastic cook, is exceptionally kind to Dad and he adores her, almost like a second daughter.

The other gentleman in our posse is Don, another person with Elkader, Iowa ties.  A widower, Don’s wife passed a short time ago.  He has a heart of gold and has been so good to take Dad different places when I have not been able.  Don is a fun loving person who doesn’t act a day over 65 even though he’s closing on 80.  Our family has been touched in so many ways by this Godly man.

There was enough food to go around… and then cake!  Sis had ordered a cake from Jules Bakery, the best premium cake bakery (in my opinion) in the eastern Iowa area.  It was a two layer, ultra moist chocolate cake with a delicious butter cream frosting.  Everyone raved about the dessert, including the nurses aids and food service staff.  Various nurses helped us with the party, general cleanup, and cleaning up on the desserts, too! 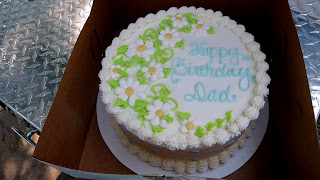 Dad packed up the last of his steak and said he was taking it home with him.  He was a little mixed up.  But by the time I left, Dad reminded me to give that leftover steak to Jesse James, the striped tomcat.  There wasn’t a scrap of meat left this morning and the kitty was stretched out snoozing on the kitchen floor… one happy cat.  I know how he feels.

Dad called later last night and thanked me for having the celebration.  He had really enjoyed it.  I hope he is around for number 84!

I had time to reflect last night.  Simply put, if Dad did not have to go to a nursing home earlier this year, he would not be with us right now.  We’ve nearly lost him several times.  But he is still able to enjoy life and he’s doing okay now.  Last night we had a lot of fun…  and I likely pissed off the slightly rigid nursing home dietitian.  That alone was worth a party!  *chuckle*

So what’s coming up?  Later this month Sheryl Crowe will be performing at the Great Jones County Fair (about 45 minutes from Cedar Rapids).  I will be there camping and will take pictures!  As always, there will also be some tinkering on the van, too.

Thanks for stopping by.   Have a great one today!