It’s been a fun trip this weekend.  Like most of the van excursions, there were all kinds of plans and about half actually came to fruition.  Spontaneity makes it all the more enjoyable!

Friday went by quickly.  After the carnival visit on Thursday, I camped at Anytime Fitness and then headed north to trout country.  The fishing did not go well.  The first trout stream, Sny Magill, was full of cars.  There were two groups of out of state folks who pretty much killed the chances of getting any fish.  Spread a few paces apart, they were casting nearly continuously with shiny spinners, terrorizing the trout.  Three people at one hole?  I uttered a few choice words to myself and decided to move to a more isolated spot.

The next place is an old standby… Otter Creek.  I caught the last four fish in little time.  Game over, right?  Nope… the fun was just starting to begin.  Though a bit late in the season, it was still possible to gather about a quart of black raspberries after a long walk in the heat.

Later in the evening the berries were made into an easy, tasty raspberry cobbler.  The main course was ribeye steak fajitas on homemade tortillas.  The nearby campers watched me make the tortillas on top of the generator box and one lady called out “That looks good!” when the first one was eaten.  I’ll post the directions for the tortillas and the cobbler on the sister blog in a day or two.

Unfortunately, on Friday night I found three wood ticks in various places – on the neck and a shoulder.  Man, I hate these things!  Fortunately, they were found pretty early and could be removed easily.  When showering, it looked look I was doing the macarena dance when looking for more bloodsucking insects! 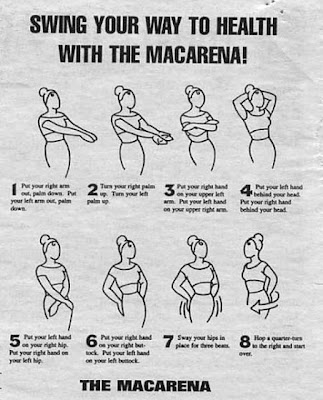 After breakfast, I rode into Decorah on the bike and over to the Trout Run stream.  Beautiful flowers were growing near the creek.  I wish the picture did them justice.  The flowers are a delicate shade of light bluish-purple. 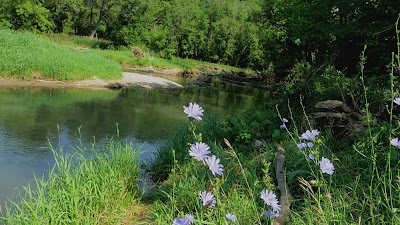 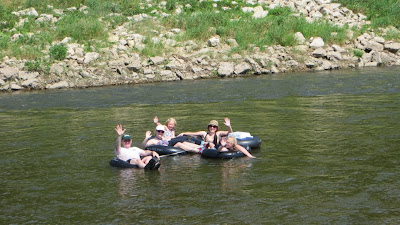 On the way back along the trail, I asked these friendly folks to take their picture for this blog.  They agreed.  Doesn’t tubing on the Upper Iowa River look like fun?

At first it appeared that was a festival in town.  Some of the downtown Decorah streets were blocked off to allow the various businesses a chance to put their offerings for sale.  People just milled around, chatting and shopping.  A local radio station had musicians playing guitar music.  It was a fun time!   I ended up buying a water bottle for the bike… It advertised “T-Bocks Sports Bar” (a favorite place).  How can you go wrong for a buck?

While meandering, a stop at the Oneota Co-Op (a healthy food type market) yielded a wonderful treat.  At first I thought it was an “apple crisp” dessert from the way it looked.  It turned out to be a leek dish with a crunchy sweet potato topping.  Holy crap, it was delicious!  Now it’s time to search for a similar recipe.  It would be a new camping favorite.

Along the ride back, I stopped to take a pic of this cool scarecrow at the city gardens.  After checking out the gardens, the  “Whippy Dip” restaurant (conveniently near the bike trail!) was calling.  It’s one of those Dairy Queen clones but much less expensive.  A medium “Brownie Bite Sundae” was $2.50 and likely had enough carbs to shut down a kidney or two.  It was worth the risk.

Here is where the afternoon took an interesting turn.  One the way back from the second trip into town, I saw a simple sign announcing “Decorah Community Prairie”…  I thought to myself, it was probably just a bunch of weeds planted by tree hugging hippies.  Vowing to be open minded, I rode over to the prairie area which was near the Upper Iowa River.  Talk about beautiful!

So instead of the intended swimming, I ended up looking at prairie flowers and listening to live music.  But that’s the fun part of van camping.  You just sort of roll with it.  There are so many beautiful things to observe.  It’s just a matter of taking the time to slow down and enjoy the roses… or the black-eyed Susans. 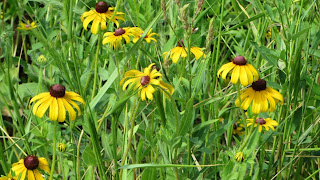 It’s Sunday now and about time to head back toward Cedar Rapids.  I promised Dad a black raspberry cobbler when I get back.  Picking berries means a detour, possibly more wood ticks to contend with, and maybe more fishing.  Who knows what other adventures are out there?

This sign at the edge of the Decorah Community Prairie sums it all up.  Have a good one and thanks for following along.

8 Responses to Cool Scenery Pictures from the Decorah Area