The Antics of Agnes

Watching wildlife is one of the favorite things to do when camping.  Although Monday’s short little outing was intended for fishing, I got to meet a special duck and watch her in action.  That proved to be more enjoyable than staring at two fiberglass poles in the snag ridden, carp infested Iowa River.

The fishing trip was at a familiar spot – the Hills Campground south of Iowa City.  I’d decided an outing was needed.  There had been a job interview at a local farm store on Monday morning – a job I think would be fun.  Since the store is needing employees soon, it seemed like now or never for a quick camping trip.  The Iowa weather was unusually cool – with highs only in the 70s!

About three hours into fishing, all that I’d caught from the Iowa River was a hybrid carp, according to one of the other campers.  Though it looked a little like a bass, the guy said the fish was “full of bones”.  It went back into the water.

As I baited a hook, sitting on top a five gallon bucket, I noticed a female duck slowly paddling by.  She was looking in my direction.  I raised my hand and said “Hi!  How are ya doing?”  To my surprise, the duck turned and headed for shore about thirty feet away from the fishing spot. 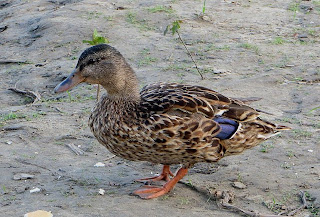 For the next ten or so minutes, the mallard walked back and forth behind me, always keeping a safe distance.  I asked her “Do you need something?”  She kept pacing and looking with an expectant stare.  Figuring the bird was hungry, I decided to go get her a treat from the van.

As I returned to the river, the mallard had almost reached the nearly empty container of fishing worms.  She was going to help herself!

“Get outta there!” I commanded and the bird backed up.  She looked a little frightened.  Having a soft heart, I threw her one of the worms and she gobbled it down… then another… and another after that.

At this point I showed her the hot dog bun.  The duck quickly teetered toward me on her webbed feet, her excitement apparent.  She knew about bread.

“Oh, you are a beautiful bird,” I told the duck in a warm, soothing voice.  “Aren’t you a pretty girl?”

You could almost see her puff up.  Seriously, is there a female on the planet that does not like to have her beauty complimented?  By the way, ducks do hear.  They don’t have regular ears but they hear through holes in their heads which are covered with feathers.

As I threw her scraps of the hot dog bun, I told the duck that I was going to call her “Agnes”.  (Don’t ask me where that name came from – it had just entered my mind spontaneously!) 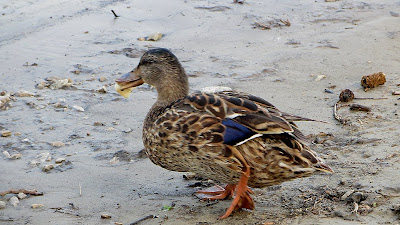 Agnes seemed to enjoy the attention as much as I enjoyed talking to her.  At one point she was only about four feet away and I’d forgotten about how painful it was sitting on the bucket.

After a while, Agnes did not want to eat any more dry bread. It was cute to see her pick up a scrap of the hot dog bun, make a trip to the river, drop the bread into the water, poke it around, and then eat it.  After she was done eating, Agnes re-entered the water and swam upstream, presumably back to her nest.

I never did catch any more fish and soon ran out of worms.  But that didn’t matter.  It was more fun talking to this cute little duck who chose to hang out with me – something most of my friends don’t seem to want to do any more.  Her amusing antics and trust were heartwarming and entertaining.

Animals are cool.  They know who to befriend!

After a peaceful night of sleep I woke up to the roof vent closing – it had started gently raining.  Now it is time to move on and maybe check out a few fishing ponds.  If the phone rings, it will be time to go back to work… If not, that’s okay too.  There are surely more things to see and enjoy today.

Have a good one… Thanks for stopping by!

3 Responses to The Antics of Agnes