Hello and welcome to the blog today.  Yesterday was a fun day with a not-so-good ending.  More about that later.

Early in the morning I took the newly remodeled van to visit my buddy Johnnie who lives in Muscatine, along the Mississippi River.  Kitty Jennifer went along for the trip.  She did very well – one amazing little girl!

Johnnie and I spent the day visiting thrift stores.  It was relaxing and fun.  The last few days of work had been extremely intense and the body and brain were due for a rest.  Johnnie and I dined at a most amazing restaurant with many different varieties of all-you-can eat sushi.  Hanging out with my best friend was a blast.  Despite the miles of driving, Jennifer sat in the arm chair and seemed very relaxed. 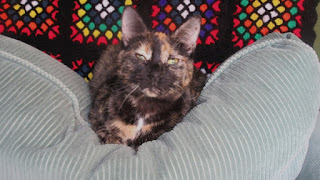 As the day wound down, I was faced with the decision of where to camp.  I had contemplated a state-run facility along the Mississippi but opted instead to visit a smaller county campground.  That proved to be a less wise option.

It was about 5:00 PM when we arrived at a familiar county campground.  I set up and left the van doors open to get some 65 degree fresh air.  After registering, an older van pulled in with two disheveled looking occupants.  The young woman was acting a little strangely.  They approached and were curious to look in the van – to the point it made me more than a little uneasy.  Their disjointed conversation, prematurely rotted teeth, exaggerated emotional responses and erratic physical movements were downright suspicious.  Thankfully the couple went back to their own vehicle.

Locking the doors on the van, I settled down and was watching the 6:00 news just as the sun was setting.  I was a little concerned about the young couple because mine was the only camping vehicle in the whole park and it is in a fairly remote area.

All of a sudden I heard someone banging – not just knocking but banging – on the back windows of the van.  (The van was backed up toward the river).  It startled the heck out of me; Jennifer panicked and ran under the bed.  I didn’t say a thing but reached for my pistol.  Then the person banged on the side doors.  I asked “What do you want?”  The female asked if she could have a can of pop.  I said no, there was just enough for myself.  She pleaded loudly – sounding desperate – and offering to pay a dollar for a can.  I told her to get out of here and leave me alone.  Who gets so emotional over a can of pop?  Then it occurred to me that I’d heard pop cans can be used for drug smoking activities.

At this time I was noticing something that smelled a little like weed but more like burning rubber and a sweet bathroom spray. The smell was strange and the Fan-tastic roof vent had drawn it in.  If indeed it was a from consuming a drug such as meth (consistent with the behavior), it would explain why the lady was behind my van away from view.  I turned off the fan switch and the smell dissipated.

A few mintues later I ventured outside, armed of course.  After unplugging the shore power and lowering the antenna, I departed and called the sheriff’s dispatcher, also letting them know the other vehicle did not even appear to be registered to camp. This morning the conservation commission was emailed and a park ranger was kind enough to say he would return the camping fees.  Law enforcement does patrol the park but in between times things still occasionally occur.

It could have been worse.  In my county and in many other rural places in Iowa, we have a lot of drug activity.  People who engage in the manufacture and usage of meth often do desperate things including fleeing from police, killing others, etc.  As a person working in retail, I see sketchy “tweakers” who routinely shoplift supplies for their meth labs.  It’s pretty scary.

If there are a few things I would urge fellow campers it would be:

1)  If possible, avoid camping alone in a rural setting if you have any concerns.  (unless it’s a desert!)
2)  If going biking, ask some trustworthy campers to keep on an eye on your vehicle.
2)  If legal in your area, get a permit to carry and have a pistol handy in your camping vehicle.
3)  Above all else, get the heck out of a situation that looks dangerous.  It takes two for a person to become a crime statistic… Trust your instincts.  Law enforcement doesn’t mind a concerned call.

Well, that’s all for now.  I’m putting some more touches on the van and at least had a chance to take it for a little spin yesterday.  Hopefully there will be another opportunity to safely camp again one of these days with kitty Jen-Jen.

0 Responses to Safety… Trust Your Instincts