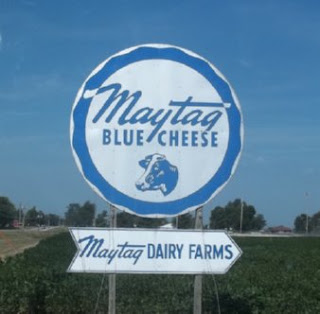 After having a blast while bike riding on Thursday, the body was tired on Friday.  Nonetheless, it doesn’t mean a person can’t explore more fun things to do in Iowa.  Such places are everywhere but are often overlooked.
I mentioned a possible destination (Newton, Iowa) to my sister and she liked the sound of it.  As luck would have it, in this town was a place Mom had always wanted to visit but never had the opportunity.  I wished that she could have come along for this trip but other than a picture on the van wall, she is no longer with us – just in our memories.  It would be cool if she could look down and see the same sights.
Newton is a city that has touched just about everyone’s life at some point.  It is a clean, thriving town located near Interstate 80 just a bit east of Des Moines.  What made it so most famous is the washing machine. 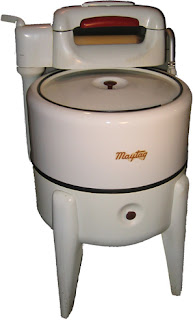 In 1893 Frederick Maytag opened a plant in Newton and for many years it was the corporate headquarters for Maytag.  Due to a number of factors, in 2006 Maytag sold out to Whirlpool and, sadly, the washing machine plant was closed about a year later.  At the time the effect was devastating to the residents of Newton.  The nation’s economy was on the verge of crashing just a couple months later due to the sub-prime mortgage crisis.  Five years later, Newton is recovering.  They are bouncing back and life has resumed after the 114 year old Maytag plant’s closing.
Though the beloved Maytag washers are slowly fading into oblivion, the name Maytag is associated with another famous product.  Cheese aficionados worldwide love the famous Maytag Blue Cheese, produced at Maytag Farms Dairy and aged for six months in a cave.  It is renowned for its quality and flavor. 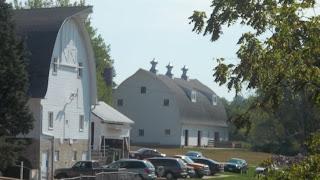 Many do not know the connection between the cheese and the washing machines.  In 1941, Fredrick Maytag II and Robert Maytag, grandsons of the founder of the washing machine company, opened a cheese factory.  They specialized in making blue cheese from homogenized cow’s milk (rather than the traditional sheep’s milk).  This technique was introduced by Iowa State University in 1938.

Here is a picture of the cheese production facility which looks much the same today.  Maytag Dairy Farms produces about a million pounds of cheese per year.  Sadly, the factory seldom gives tours but at least they have a wonderful little gift shop that sells a variety of products.  I purchased a small tub of crumbled blue cheese as well as a wedge of the delicious product.  I also tried samples of the Havarti and cheddar.  While the other two are very good, none compare with the spicy, sharp flavor of the original blue cheese.  I was told that one of their best customers is Chef Emeril Lagasse.

After the visit to the dairy farm, it was a short drive to the city of Marshalltown, a much different but equally interesting community.

This small town has a very diverse culture.  JBS Swift and Company, a meat processing plant, has attracted a large Latino population.  As a result, there are wonderful restaurants, bakeries, and other businesses to see and experience.

Walking down the street you are greeted with a number of signs in Spanish, reminiscent of being in a larger city.  There was even a little “roach coach” (mobile food truck) selling tacos, burritos, etc.

I stopped at a panaderia ( bakery) and purchased four very large sugar cookies for a mere $2.40.  Only three of them made it back home to give to Dad.  The fourth dissolved… on my tongue… in small doses.  I vowed to return to this city this year if for no other reason than just to eat.

Prior to riding the local trail, lunch was had at the HyVee grocery store for just $5, a soup and salad bar special.  This salad bar had sandwiches on it, too!  What a deal!  Nothing like a cheap, healthy lunch.
As luck would have it, the HyVee was across from the city’s paved trail.  It was a perfect place to start and stop for a 17 mile bike ride. 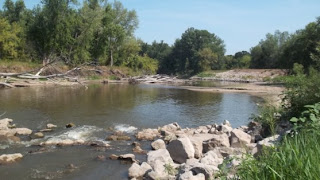 Marshalltown’s trail system has two distinct personalities.  The 4.5 mile eastern leg follows a levy along a creek to where the little waterway empties into the Iowa River.  I rode north and east to the end of the trail near this rock dam.

After a little rest break (it was 95+ degrees), I headed back to the downtown area and followed the west end of the trail for 4.0 miles.  It ran along the creek and cut through park after park, often under the canopies of trees.  I found the west end to be more scenic than the east side.  Both were fun to check out though.  This is an older trail and a little bumpy, but still worth the ride.

When the bike ride was over, it was time for a shower so I popped in to the local Anytime Fitness and took a quickie shower.  Oh, how good that felt!  This gym was a five star location and I sure wanted to pump a little iron there…. maybe next time.  Unfortunately, it was getting late so working out was not an option.  Something tells me that a return trip will happen yet this summer.  This was a very nice facility, one of the best in Iowa! 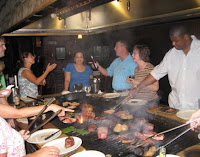 Speaking of nice places, here is a picture from the next stop, Rube’s Steakhouse in Montour, Iowa (about twenty miles east)

This is easily one of the most popular steakhouses in Iowa. It has received excellent reviews on Yelp.com, including one I posted.

Dad and I are planning a trip there yet this summer. It’s that good. Rube’s seals their steaks in plastic bags and lets them age for about 23 days or so. The result is super tender, flavorful Angus beef. This is Iowa corn-fed beef at it’s finest.

The most enjoyable part of the experience is being able to grill your own steak (or chops, chicken breasts or shrimp).  I chose a modest 28 ounce sirloin and seasoned it with salt, pepper, and garlic.  As it cooked, it was finished off with some crumbles of Maytag blue cheese that had been smuggled inside the camera bag.  The sirloin was amazingly tender and delicious.  Keeping in mind the healthy lifestyle, more than half of the steak had to be carried out.  (It made four meals – not bad!)  A person does have the option to eat the 56 ounce bellybuster (free if you can do it!).  It seemed like a good idea to pass on that one!

The next destination was the Meskwaki Casino just a few miles away.  I kind of like this place and the slots are fun – supposedly the “loosest” in the state.  The security guard was friendly and said it was no problem to camp overnight in the van.  Unfortunately, that didn’t work out.

I walked out ten minutes later with $75 more than what was brought in.  That paid for the gas for the whole trip.  Sadly, this meant moving the van – staying around was too tempting!  These casinos are friendly places.  They want you stay as long as you like… and lose.  It was safer to leave!

A couple of miles down the road was an Anytime Fitness location.  Like the Marshalltown gym (owned by the same person), the Toledo, Iowa facility was a 5 star operation.  After the “caveman” was done working out (fueled by steak), I camped overnight in the parking lot, got up, and worked out again!  I love these places.  For a person traveling on the cheap, it seems like Anytime Fitness is a terrific option for exercise and hygiene.  It adds so much comfort and convenience.
By now the sky was starting to darken.  A storm was building and it was forecast to be a strong one.  It was a good time to depart, outrun the weather, and end the enjoyable Des Moines journey.  Like so many of these little getaways, it was hard to go home!
This trip was easily one of the most fun van excursions taken so far.  It was also very cheap!  The gas was paid for by a lucky pull on the slots.  Camping was totally free because I spent one night at a Flying J truck stop and the next night parked in front of the gym!  Basically, the only costs were for meals.
Now that this is posted it’s time to do a little daydreaming and think of another place to visit.  I might lay low till after the weight loss challenge is over… The money earned will go to BP gift cards and more trips will be taken.  A nice little visit to Wisconsin for cheese, apples, and to look at the leaves sounds like a good time.
For now, have a pleasant week.  Thanks for stopping by and hanging out for a bit.  Is there a place you’ve never visited just beyond your backyard?  Check it out and have fun.
Brad, the “Van Trekker”﻿