It’s good to have the Trek bike back on the road.  Last weekend while riding it in the dark (six miles from the van!), the chain suddenly snapped will under the load of going uphill.  The chain caught and destroyed the derailleur, bringing it all the way around to the top of the wheel.  It looked as if the gear cassette was damaged as well.  I was heartbroken as well as royally pi**ed off.  Thankfully, a buddy was in the vicinity and gave me a ride back to the campground.

It’s not like the relatively new Trek has been the most reliable but I can’t blame it on anything other than bad luck and hard riding.  On the Decorah trip a tire failed – it has since been replaced under warranty.  While riding the High Trestle Trail, the Ion2 headlight died while in the boonies.  It was swapped out as a warrantied failure.  The next day a Bontrager handgrip came off and required replacement.   Shortly after that the rear rim failed and had to be changed out.  Why is the luck always so bad when out of town?  It’s got to be Murphy’s law… Whatever can go wrong will go wrong and all that…
In retrospect, the Trek has already been through hell and back.  It’s racked up 1000 plus miles in a few short months.  This type of bike is not really meant to be ridden at a high speed on 95 degree days by a larger guy.  But the dealer said it would hold up.  For that reason I was a little torqued (about 80 foot- pounds worth) when the chain snapped.  But shi* happens. 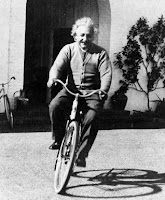 ﻿
“I thought of that while riding my bicycle.”    ~ Albert Einstein on the Theory of Relativity
What occurred next was heartwarming.  The bike dealer, Hall Bicycle in Cedar Rapids, knew I was not happy with the way the bike had been performing as well as the important role it was playing in the weight loss program.  They did a quick estimate and came to the rescue.
Hall’s replaced the Shimano Acera derailleur with a Shimano Alivio (an upgrade), a new spoke, and a new chain.  The broken chain had pressed against the 9 gear cassette making it look like the back gears were damaged.  In reality the gear cassette was undamaged, thus simplifying the repair.  The mechanic even did a mini tuneup on the bike.  The total bill was only $68.00 because Hall’s waived the labor charge!

Even more astonishing was what I discovered when preparing to ride the bike home.  The pedals had been replaced with shiny new ones.  The old ones were failing and had the mechanic automatically changed them for me under warranty.  The bike looked and rode like new.  The next morning I showed up with a bag of bagels and cream cheeses (from Bruegger’s Bagel Bakery) for the staff.  Hall Bicycle Company in Cedar Rapids is awesome.  (http://www.hallbicycle.com/ ) 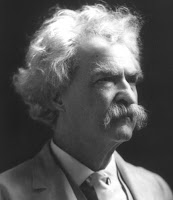 “Learn to ride a bicycle. You will not regret it if you live.”
~ Mark Twain, American humorist
There was a little paint damage from the derailleur gouging the frame.  That gave me a good excuse to also fix where the bike rack dug a bit into the finish on the top tube of the frame.  No problem – I went to Advance Auto Parts and bought a little tube of Duplicolor dark grey metallic touch-up paint for a Toyota car.  It matched perfectly.
It’s good to have the Trek back on the road.  Sometimes it is not until something is damaged that we find out how important it is to a person.  In a way, it was sort of humbling.  Sure, it’s just a damn bike.  I could buy another one.  It makes a person ask him or herself, “Am I that materialistic?”  The answer is “maybe just a little.”
﻿

“Nothing compares to the simple pleasure of riding a bike.”
~ John F. Kennedy 35th President of the United States
At the same time this bike is more than just a bike.  It’s been sort of a prosthetic device.  Biking has helped increase the quality of life immensely by allowing exercise when I could barely even walk due to diabetic neuropathy and plantar fasciitis.  It’s been kind of “wheelchair” for getting out and breathing some fresh air.  You can tell the bike has also provided a lot of happy memories just by looking at the blog posts.  Yep, the Trek 7.4 has become a member of the family.  I guess it doesn’t hurt to get just a little attached.  And yes, I do talk to it.
So here we are…  Today is the eighth of September.  The weight loss challenge is over in just three days and the results will be posted here.  It’s kind of tough watching it all come to an end…. But it’s time to change chapters and life will only get better as the momentum continues.  Sure, there won’t be the ten bucks per pound incentive, but there are more goals being set.  Watch for more about that on Tuesday.
﻿

“Whenever I see an adult on a bicycle, I have hope for the human race.” ~ H.G. Wells
For now, it’s time to go out for a little bike ride and enjoy the fine September weather.  About this time next week, I will be visiting my sister in Kansas City and collecting the proceeds from the weight loss challenge.  After that, another camping / biking / hiking / trout fishing trip to Northeast Iowa is planned as we officially transition to the fall season.  It’s been a heck of an enjoyable year.
If you’ve got a bicycle at home today might be a good day to get it out for a fun ride.  Riding is every bit as liberating as living in a van.  It’s just another way to experience freedom and security.  You gotta love that.  🙂

As always, thanks for visiting!