Saturday’s trip offered two firsts:  a new trout stream and the chance to check out a cool drive-in theatre.  What a fun day it turned into!

This van trip started in Maquoketa, Iowa  (pronounced “Muh-coke-ut-tuh”) near where Mom’s ashes were sprinkled.  I had departed early in hopes of getting in a few good hours of fishing.  A new telescopic rod and an ultralight reel were patiently waiting to be tested. 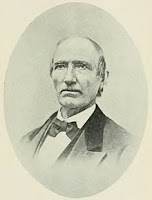 Since it was in close proximity, I chose a stream just northeast of Maquoketa in the little town of Andrew, the home of Ansel Briggs.   Briggs, a former sheriff, was elected to be the first governor of Iowa and served from 1846 to 1850.  He oversaw the development of the state’s school system as well as helped the Iowans avoid an armed conflict with our neighboring state, Missouri.  His grave and a marker are available for those passing through to visit.  I didn’t have time to stop but made a mental note to do this the next time.  In recent years, early Iowa history has been a budding interest.

Just on the other side of Andrew (and Governor Briggs’ grave) is Brush Creek, a small and very cold, spring fed creek cutting through limestone bluffs.  The stream is stocked by the Iowa Department of Natural Resources – trout fishing is way too popular for the fish population to last long.  Besides that, most streams are not cold enough to sustain trout all year – they die off during the summer.  The DNR calls this a “put and take” stream.  Some prefer to catch and release.  Most of us catch and consume.  I carry a fillet knife.

This bit of land is privately owned.  A farmer allows us to use the stream for fishing.  Since the field is also occupied with cattle, it is fenced in.  The stream is accessed by scaling a wooden ladder that straddles the barbed wire fencing.  The pasture is also full of “land mines” a.k.a. cow poop.  Yes, I stepped in it a couple of times.  Grrr… 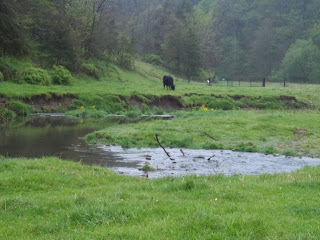 This shot of Brush Creek shows a typical Iowa pasture with a cow grazing and a crystal clear creek lazily meandering through the field.  The hills trees, clear streams have earned this region the name of “little Norway”…

Fishing involves walking about a mile course through the uneven ground – it’s a good workout.  If you know where the trout like to hide, it’s easy to grab a few for dinner.

Unfortunately, I did not catch anything at Brush Creek.  It had not been stocked for nearly a week and the stream was emptied of most of its fish.  Additionally, the land was fenced off and only about half the original fishing area still exists.  No harm done – it was a good workout.

I had almost given up for the day and then remembered that another stream – Big Mill – was stocked on Friday.  It was only twenty minutes away.  My old fishing buddy, Kenny, did not like the park at the mill site.  I had always assumed it was not worth visiting.  Hell, I’d come this far.  What’s another ten bucks worth of gas… ?

What a gem!  Big Mill turned out to offer a lot more action.  It is a rugged, mile long fishing area.  The terrain is rough and requires much walking.  I suspect that’s why big Kenny didn’t like it.  He was mobility challenged.  I prefer the walk-in areas because they thin out the fishermen a bit.  Fewer people mean more fish for everyone! 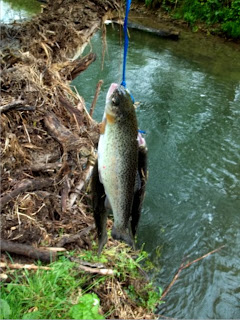 I almost immediately caught two nice trout on Berkley power bait while fishing a deep hole.  (You can see the deeper water is greenish as you closer to the brush.)  A bit further downstream a third fish was caught on a salmon egg in swift water.  What a blast!

What works best for me is a #20 treble hook with the hook barely secured to the bait.  One good nibble and dinner is on the stringer.  I don’t mess with artificial bait.  Most of our creeks are so small that we laugh at the guys who stand in the middle of them wearing hip waders and throwing flies thirty feet upstream.  Often they scare the crap out of the fish and never get a bite!

On this trip, I tried a new collapsible pole and ultralight reel.  The rod and reel worked perfectly and easily collapsed for carrying in the van.  It will be a tiny yet great addition to the mobile man cave! 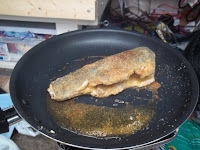 I cleaned the fish on a board by the van’s side doors at about 3:00.  The fish you see in the skillet was ready to eat at 5:30.  It tasted even better than the picture would suggest!  I just wish my sister could be here to enjoy this trout – she eats a kosher diet and trout is a staple.

Sis and I learned about trout fishing with Grandma and Grandpa Harris and I’m sure she remembers how good that fish tasted coming from Grandma’s cast iron skillet.  Grandma didn’t know about hydrogenated fats or trans-fats, etc.  She just used Crisco.

This first trip to Big Mill was one of the most enjoyable fishing expeditions in many years.  As I started to write this post, the clothes were still wet below the knees and I was exhausted from being outdoors all day, but it was worth it.

Darkness was starting to set in.  I was inside the van typing and running the Mr. Heater Buddy on low waiting for the movie to start.  This picture was snapped just as “The Three Stooges” had begun.  (A fun movie with lots of slaps and eye pokes) … It was followed by “The Hunger Games” which was a pretty good movie but left me a little unsettled.  With all the stalking and killing, it made this stealth camper a little nervous! 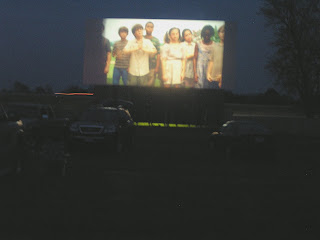 The drive-in is called simply, “61 Drive-In Theater” and it is located between Maquoketa and De Witt, Iowa.  It is one of only four drive-ins left in the entire state.  Thankfully, it is thriving.  The locals love it and people also come from all over just to reminisce.

During the warm summer months, cars are lined up so far back that some even have to be turned away.  I came early and was the first in line…  It was a great time to charge up the batteries with the generator.

While nobody was here, I was frying the trout in that picture and also microwaving mashed potatoes in the Trekker Van.   Later, I had a hot dog and some nachos.  The theatre boasts it is “a 50’s style family drive-in.”  Good… Calories eaten in the 50s don’t count in 2012.  They were not recorded since they were likely burned off!

It is now Sunday.  I slept last night at a friendly, small town Walmart (with their permission).  It was a fun little trip.  I just wish more people could experience this much joy.  Living in a van is like a daily vacation.

Tomorrow will be a return trip to northern Iowa with Dad.  A cousin died and we’re going to the funeral.  But there are a couple of trout streams nearby.  I’d better get a cooler ready for the trip… There might be more fish to clean.

Take care.  Thanks for visiting!