A day of Kosher eating?  What’s up with that?  No, I’m not Jewish… more like sort of a backslidden “Bapti-costal”.  This day’s activities were influenced by my sister.  She is currently studying Judaism and trying to maintain an Orthodox kosher diet.  Since the plan was to visit a Jewish community, it seemed like kosher eating might be a fun thing to try on Thursday after a little more ichthyological indulgence.

Fishing a second time was too tempting to pass up.  Trout are, with fins and scales, a kosher food!

Wednesday night I had slept at the Walmart in Decorah, Iowa located incredibly close to the lower end of the trout stream.  It was difficult sleeping because the clock kept teasing me as each hour was ticking by slower and slower.  Finally the sun came up and it was off to the favorite new park. 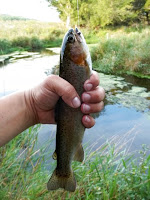 As was expected, the holes closest to the road had been fished heavily and before long another person came by and soon moved in on where I was casting.  That’s always a bit annoying and moving on seemed preferable.

The hope was not to have to venture far because I had to do so on the bike and wasn’t sure if I would make it.  The rear tire on the new bike was on the verge of separating and was making worsening thumping noises.

Nonetheless, it was necessary to play a little game of leapfrog.  While fishing the first hole, a boot clad, vest wearing angler walked past me, heading down the trail toward the better fishing spots.  Since the best hole was a little over a half mile away and with me being a selfish a**hole, it was important that he not get there first.  I took the bike off the rack on the back of van, crossing my fingers that it wouldn’t break down.

With all the acceleration that could be mustered in a short distance, I rocketed the lightweight bike down the cement trail, passing the young yuppie like a streak of [you know what].  The speedometer read 22.4 miles per hour and the back tire shook angrily, threatening to commit suicide if pushed any harder in its weakened condition.  If the tire had split, the tube would have been pinched in a hernia-like fashion and likely popped.  Thankfully it never failed.
After reaching the correct spot on the trail, I tethered the bike and walked the distance through the rugged terrain to the new favorite place.  A new hook was tied on the line only to realize that I brought the tackle but left the bait back at the bike.  The crisp, slightly foggy tranquil morning air was pierced by a few choice words.  Three minutes later (though it felt like sixty) things were ready to go.
The last four fish were caught in only five casts.  While returning I noticed that the same boot wearing guy was just a bit further downstream.  The bike and I slowly wobbled back to the van carrying the stringer of five trout outside the pannier bag.   The twenty-something year old angler saw the fish.  The moment was priceless because only about twenty minutes had elapsed since our last meeting.
A quick glance showed that the bike tire was shot.  With the trout in the cooler, it was time to hit the road.
After leaving Decorah, I headed southeast toward the town of Postville, Iowa, a city that has been in the national spotlight the last few years. 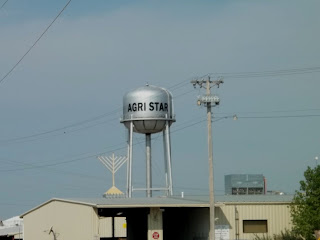 Postville is the site of a slaughterhouse and meat processing facility, once the largest kosher facility in the U.S.  They specialize in beef and poultry.  The company is known as Agri Star.

In May of 2008, the former company, Agriprocessors, was raided by immigration agents and 389 or so illegal alien workers were arrested.  At the time it was the largest such raid in U.S. history.  The company had been run by Sholom Rubashkin.  He was subsequently convicted of 86 federal fraud violations.  Rubashkin was sentenced to 27 years of federal prison time.  Agriprocessors went bankrupt and closed in October of 2008.

The facility was sold and Agri Star was opened shortly thereafter.  It is in operation today.  They make a number of tasty products including kosher meat products under the label “Aaron’s Best. 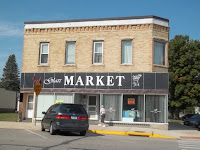 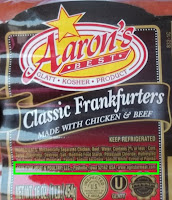 If you click on the picture and look on the label of the hotdog package (inside the added green box) you can see the company name and city of origin.  I cooked these frankfurters for dinner and they were exquisite!  From now on, it’s going to be kosher hot dogs instead of the other premium brands.

These hot dogs were purchased at Glatt Market, a tiny little kosher store on the main drag in Postville.  In addition to the hot dogs and hummus, I bought some tasty little baked crackers.  Three miles outside of Postville, the remaining delicious crackers had to be jettisoned out the window or I would have eaten them all.

Postville has a rich mix of different cultures – something unusual for such a very small town.  There is a robust Mexican community, a number of Somalies, and quite a few Jewish folks.  I saw several Jewish men dressed in the traditional black clothing with black hats.  Much of the cultural diversity can be attributed to the workforce employed at the slaughterhouse. 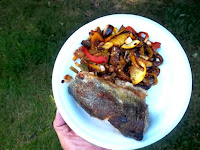 The town is beautiful and has four wonderful city parks.  At one of them I cooked up this meal of trout as well as a mix of eggplant, summer squash, onions, and various colors of bell peppers.

Just a suggestion… One lesson learned on this trip was to carry cut up yellow, green, and red peppers in a container in the cooler.  You can conveniently use them for a lot of dishes and they help keep the eating patterns healthier. 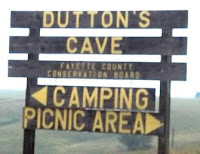 After the meal and shopping experience, I headed west from Postville to a familiar haunt, West Union, Iowa, for a Diet Coke fix and to post yesterday’s update.  On the way to West Union, I passed Dutton’s Cave park – a place that needed to be explored.

What a treasure!!!  After picking up a few supplies, it was a good call to come back to check out this little camping area.

Dutton’s Cave is a small opening in a limestone bluff.  Although you can walk up to the cave (near the “Picnic Area”), you cannot enter.  A gate blocks the trail.  If you were to become injured, authorities would not find your carcass for quite some time.  It’s in a very remote area and the slippery, wet limestone crevices are treacherous to explore.

The picnic area is in the bottom of a valley.  It has one pavilion, a few pieces of playground equipment, and a motor driven fresh water well.  The picnic area was a great place to clean out the van and freshen up a little bit.

Upon returning to the camping area, I started a campfire and roasted some of the delicious kosher hot dogs made and purchased in neighboring Postville.  Since it was in the 90s and nobody around, it was a blast camping in the “skivvies” with nobody but God there to witness it.  Now I’m not a nudist or anything but if you have never camped in the raw (or with minimal clothing), it’s a very liberating experience and there is no other feeling like the sun warming your skin.

If you ever get out this way, check it out.  The Dutton Cave park campground is at the top of a hill in a densely wooded area a mile from highway 18 just a couple of miles from highway 150, a major thoroughfare.  This hidden gem is private and very relaxing.  The price is right, too.

There are only two sites with electricity.  The cost (with power) was just $8 per night – the cheapest rate I have ever seen.  It was a great chance to run the A/C and cool off.

After turning in for the night, I listened to the Midland weather radio and learned that some storms were moving through northern Iowa. About 3:00 or so the Fan-tastic roof vent detected rain and closed itself just in time.  We had four hours of thunder and lightning, often very close. There is nothing like sleeping through a thunderstorm in the middle of the country!  It was better than one of those “soothing sounds CDs”! 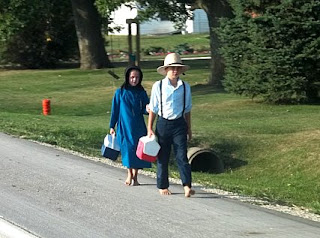 Today when returning south to Cedar Rapids, I passed through the familiar town of Oelwein and took a detour through the Amish community.  Realizing that it is frowned upon to photograph the Amish, this picture was stealthfully snapped using the zoom.

The Amish children were walking to school on the shoulder of the highway.  I wondered if they had any modern day worries about abduction and such but the children were mostly in groups of six or more.  Even these two kids had four youngsters just ahead of them.  As is typical, everyone I saw waved.

Dad was happy when I returned with several pastries from the Amish bakery.  Unfortunately, I didn’t see colorful Cousin Jim there.  It was early and he usually doesn’t arrive till later.  Marv, one of the Amish guys who runs the bakery, chatted with me for a bit.  He knows and likes Jim and his colorful opinions (complete with foul language) about politics, racial tensions, welfare, illegal immigration, and almost any other topic.  In this case, it was possible to get in and out in then minutes rather than an hour or two!

After returning to Cedar Rapids, I had to stop by the bike shop.  A defective tire on the new bike had limited the riding on the trip.  Thankfully it was replaced under warranty.  There is always time to return to the area this fall.  A second Decorah voyage is already in the planning stages for late September.  Hopefully I will have more time to look for Cousin Jim this time, too!

Thanks for checking out the blog.  Have a great weekend and enjoy the rest of the fall camping season.