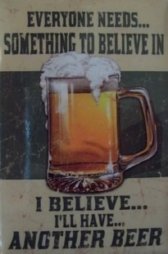 The beginning of Friday’s trip went through several towns and focused on the German settlement called the Amana Colonies.  But first, I made a quick visit to a unique bar and grille. 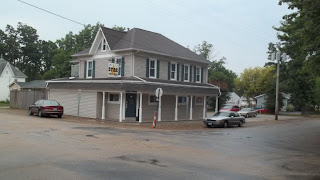 The first stop was in the small town of Fairfax, just a few miles outside of Cedar Rapids.

A small, neighborhood bar called the “Star Bar” was recommended and I had eaten there several times in the past. Little did I know, the owner is actually someone I have known for years!  There is some interesting history there, too. 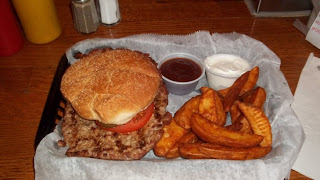 In 1870 the building was erected (no, it did not have vinyl siding back then).  Back then it was a combination hotel (upstairs) and saloon downstairs. One of the noteworthy guests was the outlaw Jesse James who dined there occasionally when passing through the area. Though I am sure the bar doesn’t look like it did in the 1870s, the charm is still there. The food is super delicious (I had a grilled pork tenderloin) and the staff is friendly.

For the frequent readers, you know how popular “tenderloin” sandwiches are in Iowa.  Most often they are breaded and deep fried.  This grilled version was equally delicious and it was only $5.99 including the broasted potatoes.  You can’t find a deal like that at a fast food restaurant!

The next stop was the old German settlement of the Amana Colonies  (www.amanacolonies.com) located about 20 or so miles southwest of Cedar Rapids.  The seven villages that form the Amana Colonies were founded around the time of 1855 by immigrants fleeing religious persecution.  The German settlers were self sufficient and by pooling their resources and labor, assisted each other in cultivating crops, baking bread, cooking large family style communal dinners, producing furniture, processing meats, weaving fabrics, schooling the young, and, yes, making (and drinking) delicious varieties of beer and wine.  No one received a wage for his/her work.  Sounds refreshing, doesn’t it?

Our family visited these villages (mainly to eat!) many times as I was growing up.  Several restaurants serve delicious American and German dishes “family style”.  (endless bowls of potatoes, cole slaw, sauerkraut and other sides to go with the plate entrees.)  If you go away hungry, it’s your own fault.  There should be enough meat and potatoes to fill up anyone!  And yes, I am mostly German.  We eat a lot of meat and potatoes… We rehydrate with gravy.

There are many other things to do when in the area.  A small biking and walking trail runs between a couple of the villages and it was the trail (and beer) that lured me here.  More about the beer later.  There is also a large Amana refrigeration plant (now owned by Whirlpool) just west of Main Amana.  For those who enjoy live theatre, check out the Old Creamery Theatre.   Dad and I have season tickets.  The plays performed there are excellent and highly entertaining. 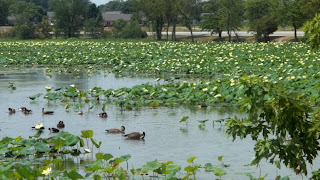 As you reach the Main Amana area (the only four way stop sign), if you turn west, the road takes you by a large lilly pond.  Just beyond the lilly pond is the Amana (now Whirlpool) refrigeration plant.  A trail (part gravel, part paved) runs between the two cities as well as around the small lake.  I rode the loop around the pond and found it relaxing.  You can see how pretty it is even during the drought.

The lake had a sort of magical effect.  I’ve been under a great deal of stress the last couple of weeks and it’s taken a toll on the mood.  Just riding the bike around a little and relaxing caused all the stresses to suddenly explode like fireworks.  Rather than suppressing everything, in privacy I was able to finally let go and release the frustration, worry, angry, fear, grief, etc. that had been building up.  It was a beautiful and very personal thing.  This has now become a special place.  Some how I know that returning here again for more “therapy” is going to happen. 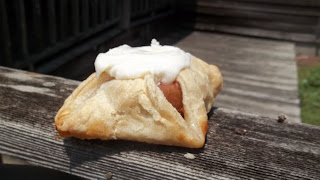 Feeling better now, the ride continued into town where I visited the Amana Bakery.  If I were able to choose a method for departing this world, it would be preferable to just eat apple strudels and drink German beer until going into a diabetic coma…  All in good time though… There are lots of good years left.  🙂

Instead of the lovely strudel, I purchased an apple dumpling – just one.  As you can see, it’s an apple (cooked in a cinnamon syrup) and wrapped up in a pastry crust, covered with some whipped cream.   Apples are healthy, aren’t they?  They can keep the doctor away, according to legend, but what about the mortician?

Even with the bike riding, I had to use the emergency supply of insulin.  Though I’m not having to take it regularly, now and then something will overload the blood sugar a little.  This was a good reminder to take it a little easy. 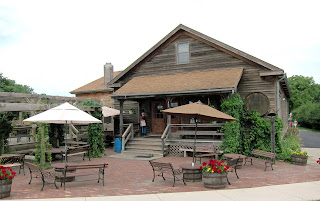 Of course, the beer at the next destination didn’t help the blood sugar either.  After the bakery (and a couple bites of apple dumpling, it was off to the Millstream brewery.

This place makes some of the best beers and sodas you find anywhere.

My brother-in-law and I are fond of them.  He likes a darker beer.  I’m more of a light wheat beer type of guy.  I slammed one and in the 93 degree weather, and it hit the spot!  If it wasn’t for the need to keep moving, two or three more would have been even better!   By the way, the light wheat beer is 4.5% alcohol.  Not too shabby!  For more info on the brewery, please check out www.millstreambrewing.com/ …  Their root beer and cream sodas are wonderful but when it comes to soda, my favorite is “barley pop”.  (beer, in other words)

The next stop was the Amana smokehouse.  They have some pretty tasty meat including excellent bratwursts and other sausages that are made on site.  Unfortunately, there are a lot of meat products that are brought in from commercial meat factories.  Again, watch the stickers to see if it is “Made in Amana” instead of “Distributed by”.

To go with the beer, I bought a piece of landjager, a sort of meat snacking stick with a spicy flavor.  Also purchased was an imported can of kippers in a horseradish cream sauce.  The country of origin for the little can of fish was Germany.  Woo hoo.  That should make a good midnight snack some time when camping.

After the smokehouse, it was easy to ride the trail back to the lilly pond.  By this time it was getting later and I needed to hit the road and pick up a few supplies in Iowa City and get set up at Hills (7 miles south of town).  I had waited a little too long and was fortunate to get the last available spot for Friday and Saturday night.
After a tasty meal cooked over the little propane stove (we’re under an outdoor burning ban right now), the body crashed.  The air conditioner in the van did it’s job and had the sleeping are at a frigid 67 degrees.  Around 7:00 or so, the energy returned and it seemed like fun to ride the bike to Iowa City to tour around, have a soda (Diet Coke, of course) and ride back.  I didn’t return until 10:00 and loved the tranquility of the cool evening ride in the dark.

It was a completely relaxing day – physically and mentally – and badly needed.  It won’t be so long till the next outing.  After the trip through the Amanas it is easy to see why so many people enjoy combining biking and beer.  It’s a great pairing (each in some moderation though).  Wheat beer is good stuff…  I might have to pick up a six pack on the way home to enjoy while working on the van today.

Time to clean out the Express to get ready for the next adventure.  There is another project to work on, too.  During the week the wifi booster will be upgraded to incorportate a new outdoor antenna that should add a lot of convenience while being almost completely invisible!  More details will be coming by next weekend.

For now, let me say “bis spaeter”  (“see you later” in the German language).

Take care of yourself and enjoy the day to its fullest.