Hello again from “Hill Country” – that part of Iowa that some liken to Norway.  On Thursday I took a wrong turn, never ended up biking on the intended trail, and camped miles away from the plan!  That just means there are too many fun things to do and being spontaneous is everything.

The course of this trip formed a loop… the first two days being in green.  Thursday is in brown.

Wednesday was spent trout fishing at Otter Creek (the current “splash picture” for the blog).  From there it was on to the favorite haunt – Decorah.  I did not do much visiting in town – just buzzed over to the city campground, coughed up $21, and slept like a baby.  The city-run Pulpit Rock Campground is $21, including electricity and sporadically available wi-fi.  The shower house is super clean – a nice hot shower seemed like a luxury!

On Thursday morning, the intention was to go to Minnesota to visit a cave, then proceed to Calmar for a bike ride.   Things quickly changed.  Yielding to temptation, I headed over to the south side of Decorah, tempted by the recently stocked Trout Run stream.  Riding the bike from a different starting point (Walmart), I hit the lower end of the stream and grabbed two very nice trout:  one rainbow and one brook trout.  It was a good idea to leave at the point or the trout fishing would have been over for the trip had the possession limit been met.

The next step was to try and find scenic Bear Creek.  It never happened.  Once I had taken the wrong turn and was quite lost, I stopped the van and said something like “Take me where YOU want to go.  Let’s go have some fun!”… Okay, it’s not unlike a captain talking to his ship, right?

Lost, but all the while home, (the van is home, right?) I set out with the mentality that one is never lost if the scenery is right.  The sun and a full tank of gas is all you need.  The van and I followed the beautiful Upper Iowa River, discovered a wonderful creamery in Waukon, fished at the Yellow River Forest State Park, and saw a few other neat places.  We camped in the town of Garnavillo – ten miles east of Elkader

While following the winding river road through Allamakee County, I passed a trout stream and wildlife management area called Coon Creek.   It will someday be perfect for scenic, peaceful, primitive camping.

﻿
After following various gravel roads all over God’s green earth, I found Highway 76 and the town of Waukon.  (sounds like wok-on).  Who can pass up a small town creamery and ice cream shop?  I had a chocolate and mint shake… It tasted great on a warm late spring day.  Check out their webpage at  WW Homestead Dairy
With the chocolate shake out of the way, I was planning to cross the Mississippi to the small town of Prairie Du Chien, Wisconsin.  Distracted by a sign proclaiming it was only 4 miles to the beautiful Yellow River Forest, who could pass up hiking in the hills?  It was needed to burn off some ice cream calories.
Isn’t this dragonfly pretty?  It seemed to almost pose for the photo.
From the hiking trails high above the stream, I ventured downhill, parked the van, and hiked into the “walk in” fishing area at Little Paint Creek in the Yellow River Forest.  The best fishing is about a mile upstream where no roads lead.  Unknown to me, they had stocked the stream minutes before.  Woo hoo!  I stopped after catching three fish.  No use getting greedy.  That means I’m carrying ten – the maximum possession limit.
The fish were cleaned sitting on a bucket in the road… where cars drive by.  The cold water felt great on the feet.  The only motorist was kind and passed slowly.   I still got a wet butt out of it.
At this point the van was thirsty and so was I.  We stopped in Harper’s Ferry, Iowa to get some gas and I spotted this cool little bar and grill – the perfect place for an afternoon snack of clam strips and soda.
﻿
Missfitz Bar and Grill was a fun place!  They had one of those little slot machine looking video games that lets you win tickets.  I put in $5 and won $9 worth of food and beverage coupons.  Louie, the mascot moose, gave the place a classy look.  They decorate him in different ways throughout the year. 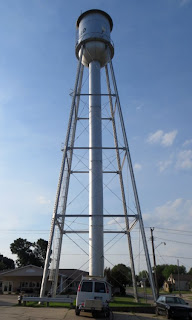 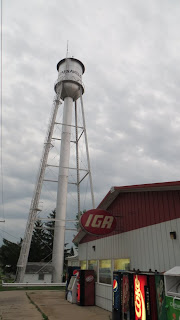 Later in the afternoon, I decided to camp at a new place instead of the usual Buck Creek near the small town of Garnavillo.  An offer was made one could not refuse!

Buck Creek has always been a blast but I was wanting to stay somewhere else – a place with a cell phone signal, TV stations, and possibly wi-fi.

Noticing an IGA grocery store, I spoke with Bob, the owner, and asked if it is okay to park by the town park.

Bob kindly offered to let me camp in his parking lot and, if I am in town again, he said I am welcome to stay there any time!  There was even free wi-fi in the neighborhood.  What a fun way to end the trip!

By Friday morning it was time to return.  The weather was horrible.  A line of severe thunderstorms with strong winds, hail, and heavy rain hit the area just before departing.  These mammatocumulus clouds on the front edge of the storm show the violent atmospheric turbulence.
The storm let me know it was time to come home.  It was a fun, relaxing trip but it’s nice to return and visit Dad and the cats.  But part of my heart is in the hills.  It’s only a matter of time until I go back… and maybe for good!
Even though the trip went much differently than intended, it was cool to find new places to camp, trails to hike, and places to fish.  Adventure doesn’t have a schedule!
Take care and thanks for riding along.
Bradford the Van Trekker