A few weeks ago Dad and I were talking about going to the Iowa State Fair in Des Moines.  At first I didn’t want to go this year.  Being a little agoraphobic, crowded places can seem uncomfortable and, at times, downright terrifying.  The fair is also notorious for offering some of the most decadent foods on the planet:  fried butter on a stick, deep fried Oreo cookies, batter fried Twinkies, you name it.  This trip would definitely test the will power!  Can a person say “no” to a “double bacon corndog” ??? 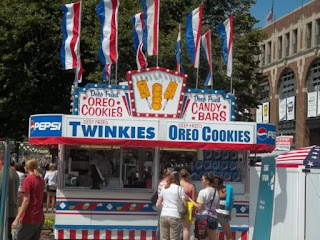 Fortunately, there are a lot of fun things to do besides eating.  A cultural center offers a number of mini classes on various art forms and crafts such as crochet and making tie dye shirts.  (I loved learning about tie dye!)

There are numerous cattle barns where young men and women show their cows, pigs, and such.  If you have never seen a dairy cow, well… I was surprised at the appearance of one.  Their udders are much larger than I’d thought they were supposed to be.

Other agriculture related competitions include judging the finest of fruits and vegetables as well as baked goods.  Each presenter hopes to win that coveted blue ribbon and the bragging rights that come with it.

While everyone scurries around below, overhead the “Sky Glider” silently shuttles folks back and forth over the fairgrounds.  There are plenty of other rides, midway games, and a few beer tents.  Several stages offer talent shows and concerts all day and evening long.  A person would have to work pretty hard to be bored!

We had a great time today.  I met a couple of cool “carnies” (carnival workers) who made me stop and think about doing carnival type work some time in the future.  The fair also inspired some food ideas for an upcoming camping trip.  More about that later.

In the meantime, here are a number of Iowa State Fair pictures along with some brief captions.

By the time I checked out some of these exhibits, the stomach was pretty empty.  The goal was to find something healthy for lunch, not deep fried Oreos.  The Iowa Turkey Federation was selling the most wonderful sandwiches of grilled, marinated turkey tenderloins served on a hot dog bun.  A little barbecue sauce was added, making it a tasty, healthy treat!

﻿
﻿
It was fun today.  The food thing went well even though I did eat a little more than was planned.  The deep fried veggie platter that kept trying to seduce a person (including mushrooms, zucchini squash, cauliflower, onion rings, green beans) was finally successful.  What a way to go….  Thank goodness it was batter dipped veggies and not deep fried Twinkies or Snickers bars.  Overall, the dietary damage was minimal and I became inspired to do something healthy and fun this weekend.
﻿
The fair was a good place to test the weight loss resolve and think of a new idea of food to try for this weekend’s excursion.  Saturday and Sunday will be spent camping near Iowa City.  It will be a simple trip – just a little biking, walking, and relaxing.  But the food this weekend will have a theme inspired by the Iowa State Fair.  I don’t want to share any details just yet but there will be new stuff to try eating “on a stick” and the grub will be relatively HEALTHY and hopefully yummy.  If it works out, I’ll have some pictures and recipes posted by Monday morning.
Today turned out to be an enjoyable experience for a person who initially didn’t want to go.  With a new, more open minded perspective, it’s easier to see the fair for what it truly is.  Even though the Iowa State Fair has a certain “Smallville” look and feel to it (complete with square dancing), it is also a celebration and reminder of the wide diversity of things that make Iowans who we are.  It’s something to be proud of, enjoyed, and shared.
Thanks for visiting!  Have a fantastic weekend!
V.T.
﻿