You know you are a winter vandweller if you have to scrape a thick layer of frost off your windshield… from the inside!

Good morning from Decorah, Iowa.  The thermometer registered a low of -1 degrees last night.  That’s cold but not at all cold for this region.  Still, it was cold enough to necessitate sleeping with my head toward the side doors of the van (where the heater is) and sticking the feet in the Carhartt jacket near the bed’s headboard.  All I can say is thank goodness I was camping at Walmart and could change out the 20# propane tank!  The Mr. Heater Buddy could keep up pretty well even at this temperature. 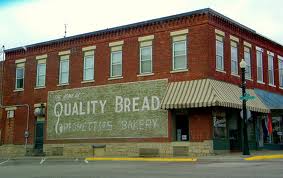 I wanted to share some more fun pictures before heading back to Cedar Rapids.  The first is the Gunderburger – a one pound hamburger cooked with locally ground beef on a delicious bun made by Pedretti’s bakery in Elkader.

The Gunder burger is sold by the Irish Shanti in Gunder, Iowa.  Gunder is a tiny little community on a county road northwest of Elkader.

On Friday night I only ate half of this wonderful burger – then enjoyed the other half for breakfast the next morning.  The toppings?  This one had lettuce, tomato, onion, pickles (which I hate!), bacon, cheese, grilled onions, and jalapenos.  Yum!

Unfortunately, on Friday night I was unable to camp at the Big Springs Trout Hatchery as planned.  The rural gravel roads in that area (near Elkader and Gunder) were in terrible shape so I had to continue farther north as it continued to snow.  The only place I knew that was a safe bet for camping was the Walmart in Decorah.  The last two nights were spent there. 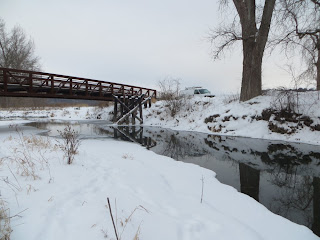 On Saturday morning (after eating the rest of a very cold Gunderburger) I ventured up the road to Trout Run Park.

The van was parked where you see it near the end of the pedestrian crossing.  It was the only place where I knew the van could make it back out!  This bridge is part of the bike trail that circles Decorah.  The right side is where I usually catch the first fish, in this quiet reflective pool.

The DNR has not stocked the stream for some time now that the fall fishing season is over.  I did not expect much action, if any.  One can imagine the delight when the first fish aggressively hammered the bait.  I knew it would be a good day.  The temperature was in the upper twenties and the weather was pretty comfortable. 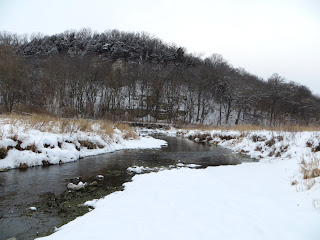 As one might expect, the fish were few and far between, particularly at this “drive-up” hole where anyone has access, even if mobility is difficult.  I started walking downstream, casting, and stumbling along the riverbank.

Several times I walked out close to the holes only to hear the dreaded “crunch” of ice below the feet.  There was no way to know for sure if one was on a little patch of ice or over a hole.  Though the water was shallow, it was still a long walk back if a foot plunged in.

The terrain only gets more difficult as you enter the timber.  But difficult to access means less fished and hopefully something to add to the stringer.

At one spot, it was necessary to climb up a steep creek bank.  I grabbed a tree branch which abruptly snapped.   In slow motion, kind of like you see in a cartoon, I said calmly “Oh $hit” before starting to lose balance. Then I clawed at some weeds that ripped, and fell backwards down the steep embankment landing on my shoulder in some weeds and rocks… It hurt.  Of course, it had to be the shoulder with rotator cuff problems.  Rotator cuff problems are like tax debts.  They don’t go away – just get worse!  It was guaranteed to hurt later.

By this time a strong cold front had passed and dropped the temperatures sharply.  There were only three fish on the makeshift stringer (which looked just like the USB charging cord for a Sansa MP3 player).  The limit is five trout – the amount I had hoped to catch.
I went just a bit farther downstream cast into a pool just below some rapids.  As luck would have it, I pulled out one of the largest rainbow trout I’d caught all season.  That clinched it.  Four fish was good enough!  By this time the fingers and toes were aching and it was time to head back.  A check of the cell phone confirmed I had been out fishing for four and one half hours.  No fishing tale here –  it seemed like only a couple of hours!
It took a long time to walk back along the trail to the van.  All the way back six inches of snow and one foot blister made for slow progress.  I got back to the van and wished for just one more fish.  I cast from the west side of the bridge and by golly, caught the last trout.  It was only a medium sized trout but that was good enough for me.  Delighted and now ready quit, I quickly shoved the telescopic fly rod to collapse it for storage… and the dang thing self destructed.   It’s okay.  Now is a good time to quit till spring.
Another pole is already on order.
As I left the park, four of the five fish were frozen solid.  The driver was too.  All five fish are still frozen and are going to stay that way until I can clean them tonight.   It’s going to be crab stuffed trout for dinner. 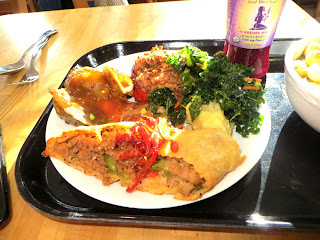 After departing the trout park, the belly was complaining that it was starving to death after the hours of difficult hiking and walking.  The right shoulder was aching (and continued to torment all night).

I decided to re-visit a favorite place – the Oneata Co-op in Decorah.  Sorry about posting another food picture but their fare is so amazing (and unusual in this area).  There was some sort of a greens salad, a Greek seasoned meat pie thing wrapped in dough, stuffed red peppers, and vegetarian, Indian style samosa appetizers.

To the left is a picture of this cool beverage purchased at the Oneata Co-op.  It is made with blackberry and hibiscus as well as containing chia seeds…  It makes me wonder if one might start growing green sprouts (like the Chia Pets on TV).  To the right is a big bowl of homemade chicken noodle soup.  It was fantastic.  When I live here some day, this healthy foods co-op is going to be a favorite haunt.

An old Norwegian guy struck up a conversation with me at the co-op.  I told him the best part of visiting is the chance to buy some good Norwegian kringla (the rich breadlike-cookies) because we don’t have them at home.  He laughed and said “All ya’ got in Cedar Rapids is the Bohemies, right?”  I laughed.  We do have a large Czech population.  But can they ever cook!  You will find wonderful kolaches and strudels in Cedar Rapids but not any Norwegian kringla.
I met a number of such pleasant folks on this trip.  This is how it is in northeast Iowa.  The people are that friendly and open.  You often hear “Ya, you betcha!” and such.
Well, it is now Sunday and time to start thinking about heading back to Cedar Rapids.  The van’s power inlet needs some work.  The old one melted and has to be upgraded and replaced.  I also had to change the shore power drop cord.  More about that in a couple of days.
*** Update ***  Just brought the fish in to clean at Dad’s… He was happy!
Thanks for visiting!  Have a great new year!
Bradford the “Van Trekker”
﻿