Friday turned out to be one of the most enjoyable fishing trips I can remember.  After speaking with the DNR about a steep decline in the Clear Lake bullhead population, Rice Lake was chosen as the next destination.

Rice Lake is near Lake Mills, Iowa – just five minutes south of Minnesota.  To get there, I took paved county roads out to the boonies.  The park is poorly marked; there is only a tiny sign that says “State Park” with an arrow pointing to the right.   Once I arrived, the area did not look too exciting.  There weren’t even any cars there.  The grounds were well kept but looked more like a little city park with a single pavilion and a small gravel “horseshoe” for car parking.  A walk to the north yielded a small sandy area along the lake.  Since already there, I decided to give the fishing a try.  After all a lake that large must surely have something in it.

What happened next was excitement in its purest form.  I had barely cast a line in when the bobber bounced.  It was a small bullhead, no bigger than what was caught at Clear Lake the day before.  Then the other pole took off.  The bobber bounced so hard that it made a sound like a “POP!” as it suddenly went under the water and then resurfaced.  The pole bent.  I set the hook and pulled in the first decent fish of the day.  It was about a thirteen inch yellow bullhead which I nicknamed the “Big Bopper” (after the “Big Bopper” Richardson).  The next dozen or bullheads were small and they were thrown back. 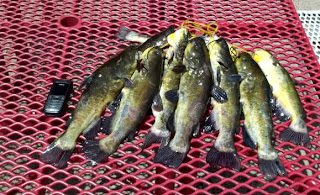 I decided to move to a less fished, more difficult to access area along the tree lined shore.  A few casts yielded another large bullhead and quite a number of smaller ones.  Eventually, I caught nine very large fish and at least thirty or more smaller ones.  Only the largest fish were put on the stringer.  The others were carefully released.  To the left is a picture of the nine fish (and the Nokia cell phone).  These are about as large as you find bullheads around here.  In most rivers they are quite a bit smaller.

By this time (around noon) I was completely exhausted from catching and cleaning the fish.  The worm supply was spent.  The stomach was painfully empty and nagged constantly and audibly.  It was a short little trip into the beautiful town of Lake Mills.  I made a mental note to revisit this sparkling little jewel later this summer.  More worms were purchased.  I also had my first piece of “macaroni and cheese pizza” at the Casey’s convenience store… The macaroni really didn’t do much to add to the pizza but the runny cheese sauce combined with the mozzarella cheese was magical! 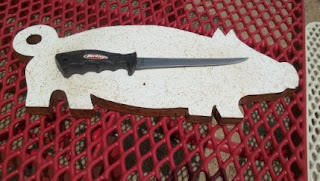 Upon returning to the lake (I had forgotten about being too tired to move), the rest of the afternoon was spent fishing.  I caught at last another forty fish in rapid fire succession.  That’s a conservative estimate.  At times the action was too fast – I remember at one point setting a hook and standing on the pole while landing a fish that was hooked on the other pole.  It was crazy.

Out of all those fish, there were only another five worth keeping.  That put the total number of keepers at fourteen.  Each fish got to take a “ride on the pig” – a cutting board I keep in the van at all times for such occasions.  I believe the pig used to belong to Grandma and Grandpa Harris.  If I remember correctly, it was used back in the 70’s when I was just a little shi* and loved fishing just as much back then. 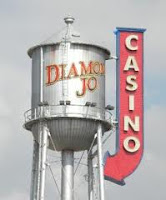 By this time it was about 5:00 PM or so and I decided to head over to I-35.  The thought was to take the expressway back to the east side of Clear Lake (near the fast food places).  Somehow I got confused and ended up a little north.

An old depression-era water tower caught my eye and I was drawn to it.  It turned out to be a dang casino – The Diamond Jo.  From the west you can’t see the word casino.  I figured what the hell… it cannot hurt to spin off a few bucks and take a chance.

I felt kind of sheepish walking in there.  The hands were grubby.  The tie dye shirt was covered in fish blood and worm guts.  I stunk like a river.  There were mud and grass stains on my pants from falling down an embankment and landing feet first into the edge of the lake (in the “less fished” area).  Talk about a slob!

Thankfully, despite the grubby condition, the casino folks didn’t care one bit.  They like serving sketchy looking people although during the day it is mostly travelers, many of them middle aged and older.

Fifteen minutes later I won about $223 dollars above what was wagered and then got the heck out of there.  It’s amazing how a stack of money will make you feel like Donald Trump even though looking like Boxcar Willie.  The gas, camping fees, food – basically the whole trip was paid for with a few lucky spins.

After returning to the campground at Clear Lake, I was completely drained and wanted to hit the sack as soon as possible.  Talk about a miscalculation.  It is Iowa’s “free fishing weekend” and the park had filled up to capacity.  The picnic table for my spot had been moved to the adjacent stall.  Young people were drinking and carrying on till about 1:00 in the morning.  They built a bonfire so large that I could see the light from it through the smoke colored cover of the van’s roof vent.  Finally, at 1:14 AM I could take no more and sat up, then yelled out at full volume (through the roof vent)  “SHUT UP!”   Shortly thereafter the voices stopped, the fire dimmed, and things became very quiet.  It was a beautiful night to sleep.﻿﻿﻿﻿
﻿ This morning, one of the bullheads was cooked up.  I believe it was the one that had been nicknamed “Large Marge” (she had the tail left on).  Along with Marge I made fried potatoes and onions as well as some eggs.  The purpose of the fruit cup was to balance things and not feel guilty about the other fattening foods.  Unfortunately there was no flour on hand so the fish was breaded with seasoned mashed potato flakes.  To get a thicker coating, I breaded the fish, sprayed it with Pam, and breaded once again.  It was pretty yummy!

After eating, it was time to head out.  There was no sight of the noisy campground neighbors, just wine bottles all over the picnic table.  They were likely still sleeping in the tents.  Most everyone else around there was already awake and cooking breakfast as well.  While preparing for departure I let the van warm up.  The V8 engine has the most soothing “BLUB!  BLUB!  BLUB!” sound that comes from the tailpipe…  The van was close enough to the drunks’ tents that it likely woke them up.   One could only hope.   *evil smile*

Today I’m heading back toward Cedar Rapids and plan to make an overnight stop in Waterloo to visit friends.  There probably won’t be any more posts from this trip unless something spontaneous and crazy happens.  You never know what fun is around the next corner…

Thanks for stopping by.  Enjoy the day!