This is the weekend of “Sand in the City”, a small arts celebration in Iowa City.  Various teams compete to see who can create the most beautiful and popular sand sculptures.  It also a chance to enjoy some fine dining and some live, loud music.  There is beer as well.  By chance, I happened to be visiting this area and thought it would be  cool to share some photos of the event.

Saturday morning I arrived early to check out the Iowa City Farmer’s Market.  It is fun to visit the older Oriental couple who make some of the best crab rangoons known to man.  As tasty as these little appetizers are, they contain about 120-150 calories per piece.  It was best to limit it to two of them along with a spring roll and call it breakfast.

After stocking up on veggies and, of course crab rangoons, it was off to Anytime Fitness for a quick workout to burn off the calories.  On this trip I decided not to bring the bicycle so it has to be the gym or a good walk if exercise is going to happen.

By the time I got done working out, it was close to the 11:00 hour and the “Sand in the City” food vendors were open.  The tantalizing smells of curried Indian food, Mexican food, and barbecued beef and pork filled the air.  I settled on a smoked beef brisket sandwich sold by a little booth representing Wildwood Barbecue – an Iowa City favorite.  They have a tasty, slightly sassy sauce called “Prairie Fire”.  With a little bit of smokey flavored sauce added, it’s the bomb.

The theme for the “Sand in the City” project was “Around the World”.   Here are the sand sculpture pictures.  I apologize for the quality of the photos.  The camera was forgotten so the camera on the cell phone had to suffice.

The “Sand in the City” event was something neat to see.  Afterwards, I decided to take a nap at River Junction park, located on Highway 22 just east of the town of Riverside.  Things were quiet at the park and it was a great place to spend a couple of hours doing some cooking.  After having visited the Iowa State Fair a few days ago, I thought it would be fun to come up with some dishes that were similar to “fair food” but not as deadly as the “double bacon corn dogs” etc.

Here is what was on the menu last night.

Of course, soda was a necessity… This time was a little different though.

To wash it all down, I drank a couple cans of Zevia Cola.  One of our Canadian readers suggested I try it as an alternative to Diet Coke and kindly sent a donation (Thanks much!) to buy some.  I tried both a lemon lime and a cola version.  Zevia is sweetened with the sweeteners Stevia and erythritol, giving it a lighter, more citrus flavor.  It was tasty.  Granted, I’ve been drinking Diet Coke for close to 30 years so I’m not entirely objective, but the Zevia Cola was pretty good.  I would drink it again!  There are still a couple of cans in the Koolatron waiting to be guzzled.

So here are a couple pictures of the camping food. By using some biscuit mix, water, and egg substitute, it was possible to make batter suitable for frying the veggies with minimal added fat.  It takes a little experimentation to come up with the right thickness of batter.  I started thinner and added a bit more biscuit mix.  You might want to also add some cornmeal or cornbread muffin mix.  My friend from Arkansas says cornmeal is the only way to cook friend green tomatoes.

Then I fried the tomatoes just long enough to set the batter and re-dipped the veggies.  It worked fine for the tomatoes – with all the little sections the batter had something to cling to.  You will know when the tomatoes are getting done.  They soften and collapse after a while.  Good stuff!

The zucchini slices were a little trickier to cook.  The batter tended to slide off.   I used a thicker batter and cooked them longer on each side. 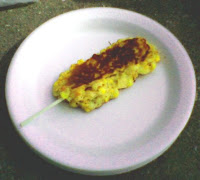 Here is one of the favorites from yesterday.  Using a thicker version of the biscuit mix batter, and with lots of sweet corn, I also made some corn fritters to put “on a stick”.

The first fritters were a little bland so I added a bit of sugar to them and that helped a lot.  It didn’t hurt cooking them in a tablespoon of real butter (which scorched a bit an darkened the fritter).

Canned  corn works fine and that is what was used.  One piece of advice – get a GOOD canned sweet corn.  I used an off brand and it was okay, but something like Green Giant brand might be better. 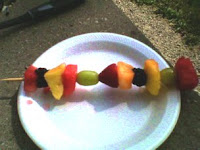 Of course, the easiest thing to assemble was the fruit on a stick – it was beautiful and tasty.  Just don’t get excited and poke yourself in the throat with the sharp end of the skewer…  (I did that… )  Cut off the pointed end, especially if feeding your kids!

You can use a fruit dip or yogurt but the fruit is so yummy that it didn’t seem necessary!  I’m sure that kids would LOVE to make and eat this little fruit-kabob thing.  It’s super healthy, too! 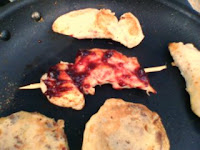 The chicken tenders you see (cooking with some slices of zucchini squash), were just scraps of breast meat.   As they finished cooking, I simply spooned a little jam over the top.

Near the Iowa City area, there is a company that makes unique, tasty jams and jellies.  It’s called “Clear Creek Orchard”.  This flavor is a red raspberry and jalapeno blend that works great on chicken and pork.  The sweet and sassy, fruity twist was wonderful on the chicken.  The next one to try will be the peach / mango / habanero jam.

After the active day and ninety minutes spent cooking and eating, it was time to relax a little.  I parked and snoozed at the Riverside Casino parking lot.  It’s a great, safe place to rest.  It doesn’t hurt winning $25 on the penny machines.  I like a “campground” that pays you to stay there.

Now it’s back to Iowa City and another day of fitness.  Without the bike this weekend, I’m mixing up the exercising a little.  After today, the goal is never to say the two words “exercise” and “routine” together again.

So, in keeping with the tradition of taking fun and healthy trips,  I’m planning another fun excursion in a couple weeks to visit northeast Iowa.  The journey will involve biking, trout fishing, and a Laura Ingalls Wilder museum.  More details will be coming later.

Thanks for visiting.  Take care!  Go do something fun today and make it a healthy one!  And if you’re going through Oelwein, Iowa, no speeding on your bicycle…