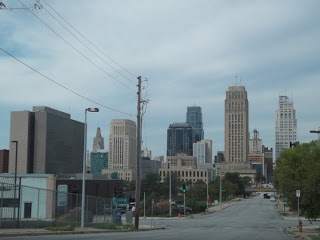 Hello from beautiful Kansas City, Missouri.  This weekend I am hanging out with my brother-in-law and sister.  It is always fun to be here but as they say, “I like to visit but don’t know that I’d want to live there…”  Life is pretty fast paced.

For the last two days the van has been 340 miles away while I’m staying at the Embassy Suites Hotel near the Kansas City International (KCI) airport.  Being close to KCI, this is a busy hotel with elevators constantly scurrying up and down the interior corners of the lobby.  From the room you can hear the muffled din of people chatting loudly, water fountains splashing, the room fan running, etc… the usual hotel noises… It’s different and very relaxing but I am terribly homesick.

Oh, how nice it would be to sleeping at Walmart or in front of an apartment building.  I miss peeing in a laundry bottle, bike riding, and grazing the grocery store for free samples.  Sure, the bed here is as soft as a cumulus cloud but there is no crisp morning air and peek of sunlight to wake up to.   Everything is too comfortable!  As much as I really like this place, there is no place like the cargo van and the solitude. 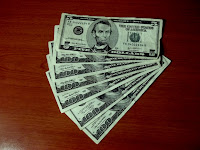 This reason for this trip was a celebration…  Yesterday Sis gave me $605.00 from the first phase of the weight loss challenge.  It sounds strange to say but I didn’t feel right taking it…  The new lifestyle has brought so much happiness and vitality… that should be reward enough.  I feel kind of shady, like the only way to accomplish the change was by being bribed.  But it is what it is.

Fortunately, there is a home remedy that helped with the guilt.  A person just needs to clutch the bills firmly close to his or her nose, inhale deeply several times, and think happy thoughts about many more camping trips.  That helped. 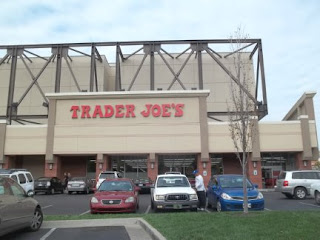 We had an awesome day on Saturday.  This morning Sis and I started on the north side of Kansas City, Missouri (KCMO) and headed to a cool store, Trader Joe’s.

I was thinking about a buddy, Jeff, from the Smart Aldi Shopper blog while exploring the aisles.  Trader Joe’s is owned by the same folks that own Aldi and the store has a similar feel to it.  Most of the products sold are labeled simply “Trader Joe’s” but they are the same as name brand items, just packaged differently.

Unlike Aldi’s, Trader Joe’s had much more produce, upscale breads, a sandwich deli and tons of frozen ethnic foods from Indian Cuisine to Mexican tamales.  It was exciting!  With the lower prices and huge variety of cool stuff, Trader Joe’s could be a dream come true for someone living in a van.  I would want to live nearby! 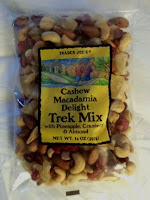 One cool buy was some very thin bars (the thickess of a granola bar run over by a 1969 Ford Van).  It’s sort of the consistency of a “fruit roll-up” product but this little treat is made of fiber and dried fruit.  Each bar has about six grams of fiber and a relatively small amount of carbs.  They are perfect for the bike.  Also purchased were two bottles of extra virgin olive oil – one was garlic flavored.  The price was amazingly low.  Each bottle was only $3.49 and $3.99 respectively.  Similar oil was $8 and higher at the Whole Foods market.

But Sis noticed something else.  She spotted various trail mixes that we simply could not pass up.  The one that was the most intriguing was the most expensive and contained cashews, macadamia nuts, pineapple, cranberry and almonds.  I was too cheap to buy it but she bought it for me, partly because of the name on the bag.  Who can pass up “TREK” mix for a … “trekker”? 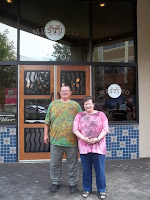 For lunch my sister and I visited an awesome restaurant on the “Kansas side” of the area, in the town of Leawood.  It is called Mestizo.   Information about the restaurant was featured on the Food Network.  Mestizo is owned by Chef Aarón Sánchez and features upscale, modern, exciting Mexican food with its roots in traditional Mexican cuisine.  The offerings are beautiful and the flavors are incredible.

This was such a departure from the local taquerias and the restaurants where I used to work.  There was no need to drown the food in Tapatio sauce (similar to Tobasco).  That might have qualified as a misdemeanor in this neighborhood.  Such well designed and well executed dishes don’t need anything else to mask or overpower the flavors. 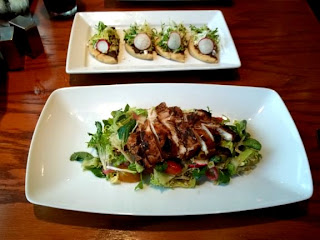 The plate at the top is a small dish called “sope”.  A sope (also called a gordita) varies widely in its construction from region to region in Mexico, according to what I read.  The bread is a puffy tortilla made of corn meal dough (“masa de maíz”).  The dough is made thick and fried, then has various salsas, vegetables, meats, etc. put on top of it.  This one has a black bean puree, avocado, and a little garnish.  The circles you see are radish slices.
Below that is what I enjoyed for lunch – a grilled chicken salad on fancy greens with some of the cutest, sweetest, little yellow, red, and orange tomatoes – they were sweet like candy.  It was heavenly and healthy.  It is funny how when food is this good a smaller portion will satisfy a person so much more than grazing a buffet.
﻿
﻿ 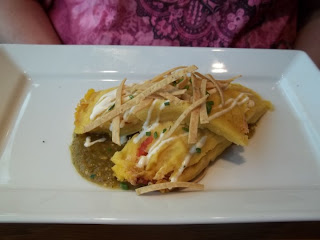 My sister ate the green chile, sweet corn tamales.  She is still raving about the food.  I tried a bit and loved the rich corn flavor and seasonings.
From looking around inside the establishment and speaking with the waitress, it is clear that this restaurant stands high above so many others.  So many of the newer Mexican eateries  in our area have had so-so food, bland beans, and flavorless rice.  It is delightful to find something this good!
After all that fun, Sis and I drove to the local Cabellas store.  Some ladies stopped us on the way in and offered a free hat and t-shirt to apply for a credit card.  No problemo.  I don’t have a house or a job so it was easy to get turned down.  I just wanted the free t-shirt and cap!
My sister found the fudge shop and purchased some.  She tried a bit and said it was very tasty.  I trust her.  There was no need for pumpkin fudge on top of Mexican food.  I was too busy drooling over the cooking section of the store.
Cabella’s sells the little butane stoves like that used in the Trekker Van as well as the fuel canisters.  But it was the many cast iron gadgets and other cooking accouterments that got my dander up.  Thankfully there is no room for more cooking toys or the debit card would have taken a big hit. 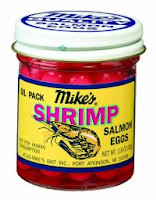 About the only bargain found was my favorite trout bait (been using it since the early 1990s) was only $3.49 a jar.  It used to cost me over $5.50 per container on Amazon … PLUS shipping.

Now and then people have asked works best for catching trout… If trying for brown trout I usually just turn over a few rocks and look for earthworms.  But for rainbows, it’s hard to beat Mike’s shrimp flavored salmon eggs.  The streams around here are so small (and trees so close) it’s not always easy to fly fish with long rods, gracefully whipping the fly back and forth.  You’re more likely to snag a tree.

#20 treble hooks work great for the size of trout we have around here.  As years go by and the eyes get worse, they can be pain in the butt to tie on.  They also hurt like a bit*h when you embed one in your finger and have to tear it out… That hurts a heckuva lot more than checking the blood sugar!

After leaving Cabella’s, my brother-in-law, sister, and I went to a Japanese steakhouse (similar to what you see in the picture) for dinner.  It was easy to choose the healthy options and eat a smaller portion.  For those who have never been to such an establishment, the Teppenyaki chef cooks at a table in front of you, cracking jokes and playing pranks while cooking your food.

Our chef had some leftover shrimp on the grill and would smash each one and flip it to you, expecting a person to catch it in his or her mouth.  I caught one.  He tried the trick on each person at our table (except for my sister who eats kosher and cannot have shrimp!)  When he got back around to our end of the table, he threw the remaining SIX more at me, one after another.  Two fell on the table; I caught the other four.  That’s not bad though –  five out of a total of seven is a pretty good score but I’m surprised that any were missed.   What a blast though!  Since there were leftovers, I made sure to package up some of the shrimp for Mr. Jesse – the tomcat at home.  He’ll gobble them  down first and climb up on my chest and purr.  He’s been taught well.  Food comes first!
It was a fun couple of days.  Sunday I have to return to Iowa but look forward to sleeping outside.  There’s no place like home but oh… those green chile, sweet corn tamales.  I just wish they were closer… and the same goes for Trader Joe’s.
Thanks for visiting!  Enjoy the rest of the weekend.